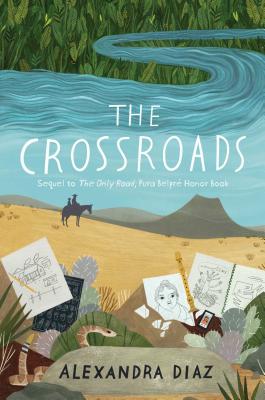 “An incredibly heartfelt depiction of immigrants and refugees in a land full of uncertainty.” —Kirkus Reviews
“Insightful, realistic picture...especially important reading for today’s children.” —Booklist
“Fans of The Only Road will appreciate...while teachers and librarians may find the text useful to counter unsubstantiated myths about Central Americans fleeing to the US.” —School Library Journal

Jaime and Ángela discover what it means to be living as undocumented immigrants in the United States in this timely sequel to the Pura Belpré Honor Book The Only Road.

After crossing Mexico into the United States, Jaime Rivera thinks the worst is over. Starting a new school can’t be that bad. Except it is, and not just because he can barely speak English. While his cousin Ángela fits in quickly, with new friends and after-school activities, Jaime struggles with even the idea of calling this strange place “home.” His real home is with his parents, abuela, and the rest of the family; not here where cacti and cattle outnumber people, where he can no longer be himself—a boy from Guatemala.

When bad news arrives from his parents back home, feelings of helplessness and guilt gnaw at Jaime. Gang violence in Guatemala means he can’t return home, but he’s not sure if he wants to stay either. The US is not the great place everyone said it would be, especially if you’re sin papeles—undocumented—like Jaime. When things look bleak, hope arrives from unexpected places: a quiet boy on the bus, a music teacher, an old ranch hand. With his sketchbook always close by, Jaime uses his drawings to show what it means to be a true citizen.

Powerful and moving, this touching sequel to The Only Road explores overcoming homesickness, finding ways to connect despite a language barrier, and discovering what it means to start over in a new place that alternates between being wonderful and completely unwelcoming.

Alexandra Diaz is the author of The Only Road, which was a Pura Belpré Honor Book, an ALA Notable Book, and the recipient of two starred reviews. She is also the author of Of All the Stupid Things, which was an ALA Rainbow List book and a New Mexico Book Award finalist, The Crossroads, and Santiago’s Road Home. Alexandra is the daughter of Cuban refugees and lives in Santa Fe, New Mexico, but got her MA in writing for young people at Bath Spa University in England. A native Spanish speaker, Alexandra now teaches creative writing to adults and teens. Visit her online at Alexandra-Diaz.com.

A week after fleeing a dangerous gang in Guatemala and arriving in the U.S. to live with his brother, Tomás, Jaime and his cousin Ángela are starting a new school with a completely new language. While Ángela has no trouble fitting in, Jaime finds his only friends are a quiet boy named Sean, who sits with him on the bus, and Don, the old cowboy who tends to the ranch. As Jaime struggles to deal with prejudiced classmates and news of his abuela in danger back in Guatemala, he leans heavily on Don. But when the rancher is detained, Jaime relies on the help of Sean, who teaches him sign language, and works on expressing the thoughts he can’t quite say out loud though his art. Fans of Diaz’s The Only Road (2017) will appreciate seeing some familiar characters as well a new set of kind and complex characters. Diaz paints an insightful, realistic picture of a place that’s filled with opportunity but simultaneously rife with discrimination, which is especially important reading for today’s children. — Selenia Paz
— Booklist

Picking up a week after the grueling journey chronicled in The Only Road (2016), Diaz's profound sequel finds 12-year-old Jaime Rivera and his cousin Ángela adjusting to life in El Norte. Jaime doesn't know English too well, and his first days at school result in an unfortunate bathroom accident, mocking giggles from his classmates, and snide comments from the class bully, Diego. To Jaime's horror, Ángela seems to have changed overnight, making new friends with ease, switching to English almost exclusively, and acting aloof about their recent odyssey. Meanwhile, the specter of deportation looms endlessly, and terrible news from Guatemala involving Abuela and the Alphas erases any hope of returning to their village any time soon. Like its predecessor, this timely follow-up addresses the threats that immigrants and refugees face daily in El Norte, where "talk of a massive wall and deporting all of us" continues unabated. Diaz keeps the intimate third-person narration intact as she skillfully explores Jaime's new life in New Mexico. . . . An incredibly heartfelt depiction of immigrants and refugees in a land full of uncertainty.
— Kirkus

This sequel to The Only Road sees the internal border crossings of Jaime and his cousin Ángela as they start new schools and begin to recover from their arduous journey to the U.S. An isolated ranch where Jaime’s older brother works is the setting for the teens’ emotional roller coaster of guilt, loneliness, loss, and fear. Tensions peak when Jaime learns that the gang they fled retaliated by attacking their beloved Abuela, who eventually dies, and when the grandfatherly ranch manager, Don Vincente, is detained after 60 years in the U.S. Jaime succumbs to the pressure and punches a school bully, which does little to lessen his grief, the constant dread of being deported, and the embarrassment of being the new English-language learner bound by strict no-Spanish rules. As Jaime continues to draw in order to document and remember his past, he discovers this work is also helpful in building new friendships and providing evidence for Don Vincente’s deportation hearing. . . . Fans of The Only Road will appreciate following Jaime and Ángela on the next phase of their lives, while teachers and librarians may find the text useful to counter unsubstantiated myths about Central Americans fleeing to the U.S.
— School Library Journal

The problems in this book are pulled from contemporary news stories. Hoping to escape the gang violence of their home, desperate parents send their children alone on the dangerous journey to the United States. Cousins Jaime and Ángela have been sent from Guatemala to live with Jaime’s older brother, Tomás, who has been living illegally on a ranch in New Mexico for the past eight years. Twelve-year-old Jaime does not want to live in America, a place where he has no friends and cannot speak the native language. Ángela, who is 15 and speaks better English, has no problem assimilating into American high school life. Jaime finds a friend in the old ranch hand, Don Vicente, and his wife, the ranch cook, Doña Cici. Then they all get the worst kind of news: the gang from which they have fled has attacked and killed their grandmother in retribution. To add to their sadness, Don Vicente is picked up by immigration officials while riding to inspect bulls for the ranch owner. Jaime makes it his mission to save Don Vicente from deportation and has to work outside his comfort zone. The book has a satisfying ending without attempting to solve the major issues that do not have clear real-life solutions. The book has an extensive list of references for further research. Also included is a further reading list and a glossary of Spanish words used throughout the book. The author, a Cuban immigrant herself, knows firsthand the issues that children experience when coming to the United States as immigrants or refugees. Richard Fanning, Library Media Specialist, Spring Forest Middle School, Houston, Texas

Cousins Jaime and Ángela, who fled gang terror in Guatemala in The Only Road (BCCB 11/16), have been living in Jaime’s brother’s trailer on a New Mexico ranch for just a week, but Tomás is determined to act responsibly in loco parentis and enrolls them in school. Ángela makes friends quickly at her high school, joining the musical and hanging out with the drama kids, but Jaime isn’t doing as well. His math skills are up to speed, but his faltering English makes him the target of a middle-school bully. Vicente, a ranch manager who crossed into the United States decades ago, takes Jaime under his wing, teaching him to ride and helping him acclimate to his new surroundings. When a government sweep of undocumented workers snags Vicente, however, Jaime wonders whether, with all his obstacles, he’ll ever find a place to call his home. Diaz focalizes her novel through Jaime’s experience, which keeps legal explanations at a manageable level as the protagonist learns the perilous ropes of the immigration system. Though the author closes her story on a positive note, she pulls no punches in assessing that the cousins’—and Vicente’s—experiences are shaped by current enforcement guidelines, and her afterword and references paint a sobering picture of the opportunities offered to immigrants and asylum seekers at the U.S. border. A glossary of Spanish terms is also included.
— BCCB