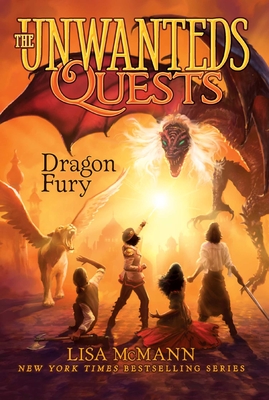 This is book number 7 in the The Unwanteds Quests series.

Ten years after Alex and Aaron Stowe brought peace to Quill and Artimé, their younger twin sisters journey beyond Artimé in the sixth novel in the New York Times bestselling sequel series to The Unwanteds, which Kirkus Reviews called “The Hunger Games meets Harry Potter.”

As the greatest army ever assembled in the seven islands flies to the land of the dragons, everyone’s mind is haunted by the same thought: Thisbe Stowe betrayed them all.

Thisbe struggles to regain the trust of her brother Aaron and the people of Artimé after one crucial mistake forces her to abandon her intricate plan against the Revinir. Aaron is devastated by Thisbe’s actions and refuses to hear her explanation, feeling a sense of responsibility for the wrong she’s done mixed with his own deep regret and fears over his dark history. Complicating things are Thisbe’s conflicted feelings about the Revinir, leaving her wondering if she allowed herself to get too close to the dragon-woman…and if she really is more evil than good after all.

Risking everything they’d fought for since first being declared Unwanted, the people, creatures, and statues of Artimé and their allies make a final desperate attempt to take down the Revinir and bring peace to their world. But is the Revinir too powerful to defeat? And will the Artiméans ever find out what’s behind that last secret door?

Lisa McMann lives in Arizona. She is married to fellow writer and musician, Matt McMann, and they have two adult children. Her son is an artist named Kilian McMann and her daughter is an actor, Kennedy McMann. Lisa is the New York Times bestselling author of over two dozen books for young adults and children. So far she has written in genres including paranormal, realistic, dystopian, and fantasy. Some of her most well-known books are The Unwanteds series for middle grade readers and the Wake trilogy for young adults. Check out Lisa's website at LisaMcMann.com, learn more about The Unwanteds Series at UnwantedsSeries.com, and be sure to say hi on Instagram or Twitter (@Lisa_McMann), or Facebook (Facebook.com/McMannFan).