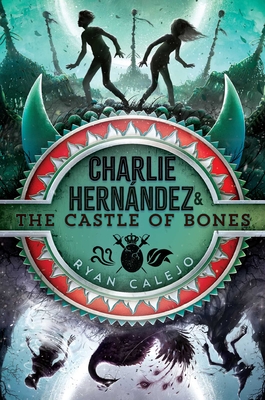 This is book number 2 in the Charlie Hernández series.

Inspired by Hispanic folklore, legends, and myths from the Iberian Peninsula and Central and South America, this bold sequel to Charlie Hernández & the League of Shadows, which Booklist called “a perfect pick for kids who love Rick Riordan” in a starred review, follows Charlie as he continues on his quest to embrace his morphling identity.

Charlie Hernandez still likes to think of himself as a normal kid. But what’s normal about being a demon-slaying preteen with an encyclopedic knowledge of Latino mythology who can partially manifest nearly any animal trait found in nature? Well, not much. But, Charlie believes he can get used to this new “normal,” because being able to sprout wings or morph fins is pretty cool.

But there is a downside: it means having to constantly watch his back for La Mano Peluda’s sinister schemes. And when the leader of La Liga, the Witch Queen Jo herself, is suddenly kidnapped, Charlie’s sure they’re at it again.

Determined to save the queen and keep La Liga’s alliances intact, Charlie and his good friend Violet Rey embark on a perilous journey to track down her captors. As Charlie and Violet are drawn deeper into a world of monstruos and magia they are soon left with more questions than answers—like, why do they keep hearing rumors of dead men walking, and why is Charlie suddenly having visions of an ancient evil: a necromancer priest who’s been dead for more than five centuries?

Charlie’s abuela once told him that when dead men walk, the living run in fear. And Charlie’s about to learn the truth of that—the hard way.

Ryan Calejo is the author of the Charlie Hernández series. He was born and raised in south Florida, where he graduated from the University of Miami with a BA. He teaches swimming to elementary school students, chess to middle school students, and writing to high school students. Having been born into a family of immigrants and growing up in the so-called “Capital of Latin America,” Ryan knows the importance of diversity in our communities and is passionate about writing books that children of all ethnicities can relate to.

"Well worth it for ravenous fans of quest stories."
— Kirkus Reviews

After saving his parents from the legendary bruja La Cuca, Charlie is just settling into his new life with the League of Shadows when Queen Joanna, their leader, is kidnapped. He and his friend Violet embark on a quest to rescue Joanna, and their pursuit takes them through Brazil, Argentina, and Chile up to El Salvador and Mexico. As they piece together clues involving mysterious castles of bones and a centuries-old necromancer, Charlie and Violet encounter various creatures from Hispanic myths, including a lobisomem (Brazilian werewolf), an alicanto bird, and okpe ogres, some of whom help, while others try to stop the children at all costs. But when they reach their final destination and uncover an ancient secret, Charlie learns that those he thought were friends may in fact be enemies. Through brief, fast-paced chapters, this ongoing adventure introduces more vibrant culture and legends, all while developing Charlie, Violet, and the other members of La Liga. Middle-grade readers will enjoy this second installment of the Charlie Hernández series with its adventure, memorable characters, and heartbreak.
— Booklist

"Filled with action with fast-paced chapters, Calejo's novel is sure to draw in readers and introduce them to the magic, beauty, and history of Hispanic myths and legends (many of which are elaborated on further in a glossary for those unfamiliar with the stories). This is a perfect pick for kids who love Rick Riordan's many series, particularly for those eager for mythologies beyond Greek and Roman stories."
— Booklist *STARRED REVIEW* for Charlie Hernández & the League of Shadows

"He's not the "chosen one"—but the bad guys think he is. Mexican-born, American-raised Charlie Hernández just grew horns. And feathers. It's inconvenient. All of a sudden, all the Hispanic (both Latin American and Iberian) myths he learned from his abuela leave the world of legend and reveal themselves in Miami—and everyone, good and bad, seems to be after Charlie. A winner for all kids, but it will be especially beloved by Latinx and Hispanic families who may recognize some of the characters."
— Kirkus, STARRED REVIEW for Charlie Hernández & the League of Shadows

This magical adventure brings the Hispanic mythologies . . . to life . . . "the detailed attention to various Hispanic folkloric and mythological traditions is accessible to readers new to the legends as well as old hands, and this multicultural story proves to be a satisfying read for anyone interested in fantasy action."
— BCCB for Charlie Hernández & the League of Shadows

"The story is fast paced and jam-packed with many encounters with mythological creatures loosely based on folklore from around the Spanish-speaking world. The glossary at the end is helpful with a description and country of origin for each mythological being. VERDICT A great start to a new series that will be devoured by fantasy fans who enjoy action with ample doses of mythological inspirations."
— School Library Journal for Charlie Hernández & the League of Shadows