This Is Why They Hate Us (Paperback) 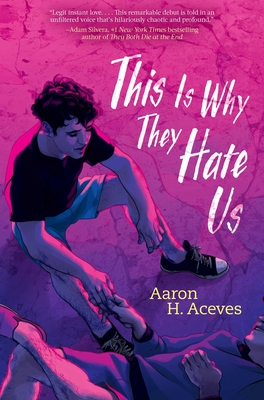 This “hilariously chaotic and profound” (Adam Silvera, #1 New York Times bestselling author of They Both Die at the End) summer romp is Netflix’s Never Have I Ever meets What If It’s Us about a high school senior determined to get over his unrequited feelings for his best friend by getting under someone else.

Enrique “Quique” Luna has one goal this summer—get over his crush on Saleem Kanazi by pursuing his other romantic prospects. Never mind that he’s only out to his best friend, Fabiola. Never mind that he has absolutely zero game. And definitely forget the fact that good and kind and, not to mention, beautiful Saleem is leaving LA for the summer to reunite with a girl his parents are trying to set him up with.

Luckily, Quique’s prospects are each intriguing in their own ways. There’s stoner-jock Tyler Montana, who might be just as interested in Fabiola as he is in Quique; straitlaced senior class president, Ziggy Jackson; and Manny Zuniga, who keeps looking at Quique like he’s carne asada fresh off the grill. With all these choices, Quique is sure to forget about Saleem in no time.

But as the summer heats up and his deep-seated fears and anxieties boil over, Quique soon realizes that getting over one guy by getting under a bunch of others may not have been the best laid plan and living his truth can come at a high cost.

Aaron H. Aceves is a bisexual, Mexican American writer born and raised in East Los Angeles. He graduated from Harvard College and received his MFA from Columbia University. His fiction has appeared in jmww, Epiphany, and them., among other places. He currently lives in Texas, where he serves as an Early Career Provost Fellow at UT Austin. He can be found at AaronHAceves.com or @AaronAceves on Instagram or @AaronHAceves on Twitter and TikTok.

“Legit instant love for This Is Why They Hate Us. This remarkable debut is told in an unfiltered voice that’s hilariously chaotic and profound. I genuinely wish I could’ve read this queer Latine book as a teen, and I’m so happy it exists for this generation and beyond.”
— Adam Silvera, #1 New York Times bestselling author of They Both Die at the End

"Aceves is a breakout new voice in YA that’s equal parts lyrical and hilarious. THIS IS WHY THEY HATE US is an earnest story full of heart and heartache that explores how terrifying it is to share every part of yourself with someone and the complexity of juggling multiple identities. THIS IS WHY THEY HATE US shows us how even though we may feel unlovable, we're all are deserving of love, without stipulations or needing to earn it."
— Aiden Thomas, New York Times bestselling author of Cemetery Boys

"Aaron H. Aceves' This Is Why They Hate Us is a debut novel written with humor and passion. This book is as bold and urgent as its title, and it introduces us to a fresh new queer perspective and protagonist."
— Abdi Nazemian, author of Stonewall Honor book Like a Love Story

“This is Why They Hate Us is a lyrical story of queer longing, romance, and true friendship, which looks at the anxious pains of growing up with humor and heart.”
— Ryan Douglass, New York Times bestselling author of The Taking of Jake Livingston

"It’s rare to find a book as achingly, tenderly honest as This Is Why They Hate Us, or a narrator as painfully relatable as Quique Luna. I’m so grateful this story is in the world."
— Adib Khorram, award-winning author of Darius the Great Is Not Okay

* "Aceves has written a well-plotted, thoughtful coming-of-age novel featuring a complex, fully realized protagonist—not to mention Enrique’s friend Afro–Puerto Rican Cuban Fabiola, a force of life, and, of course, Saleem, whom readers will love as much as Enrique does. LGBTQIA+ literature needs more stories about male bisexuals, especially ones that are as good as this."
— Booklist, starred review