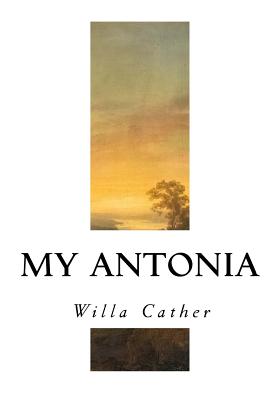 My Antonia by Willa Cather.....

Orphaned Jim Burden rides the trains from Virginia to Black Hawk, Nebraska, where he will live with his paternal grandparents. Jake, a farmhand from Virginia, rides with the 10-year-old boy. On the same train, headed to the same destination, is the Shimerda family from Bohemia. Jim lives with his grandparents in the home they have built, helping as he can with chores to ease the burden on the others. The home has the dining room and kitchen downstairs, like a basement, with small windows at the top of the walls, an arrangement quite different from Jim's home in Virginia. The sleeping quarters and parlor are at ground level. The Shimerda family paid for a homestead which proves to have no home on it, just a cave in the earth, and not much of the land broken for cultivation. The two families are nearest neighbors to each other in a sparsely settled land. ntonia, the elder daughter in the Shimerda family, is a few years older than young Jim. The two are friends from the start, helped by Mrs. Shimerda asking that Jim teach both her daughters to read English. ntonia helps Mrs. Burden in her kitchen when she visits, learning more about cooking and housekeeping. The first year is extremely difficult for the Shimerda family, without a proper house in the winter. Mr. Shimerda comes to thank the Burdens for the Christmas gifts given to them, and has a peaceful day with them, sharing a meal and the parts of a Christian tradition that Protestant Mr. Burden and Catholic Mr. Shimerda respect. He did not want to move from Bohemia, where he had a skilled trade, a home and friends with whom he could play his violin. His wife is sure life will be better for her children in America.