Suffering Is Never for Nothing (Hardcover) 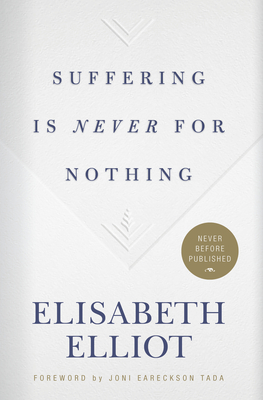 Hard times come for all in life, with no real explanation. When we walk through suffering, it has the potential to devastate and destroy, or to be the gateway to gratitude and joy.

Elisabeth Elliot was no stranger to suffering. Her first husband, Jim, was murdered by the Waoroni people in Ecuador moments after he arrived in hopes of sharing the gospel. Her second husband was lost to cancer. Yet, it was in her deepest suffering that she learned the deepest lessons about God.

Why doesn’t God do something about suffering? He has, He did, He is, and He will.

Suffering and love are inexplicably linked, as God’s love for His people is evidenced in His sending Jesus to carry our sins, griefs, and sufferings on the cross, sacrificially taking what was not His on Himself so that we would not be required to carry it. He has walked the ultimate path of suffering, and He has won victory on our behalf.

This truth led Elisabeth to say, “Whatever is in the cup that God is offering to me, whether it be pain and sorrow and suffering and grief along with the many more joys, I’m willing to take it because I trust Him.”

Because suffering is never for nothing.

Elisabeth Elliot was born Elisabeth Howard to missionary parents who were serving in Belgium. Upon their return to the United States they settled in Pennsylvania and New Jersey before she began college at Wheaton College. It was there that she discovered her love for biblical Greek, a love that would ultimately lead to her making the New Testament accessible to some of those for whom it had not been previously accessible. Wheaton College is also where she met Jim Elliot, who she later married in Quito, Ecuador, where they were both serving as missionaries.

Jim and Elisabeth had one daughter, Valerie, who was ten months old when her father was killed by some Waorani men who he, along with four other missionaries, had been seeking to develop a relationship for gospel purposes. Elisabeth continued working with the Quichua people of Ecuador when, through a remarkable providence, she met two Waorani women with whom she and Valerie lived for a year. They were the key to Elisabeth and Valerie going to live with the tribe that had killed the five missionaries. They remained there for two years.

Elisabeth and Valerie returned to the Quichua work and remained there until 1963 when she and Valerie returned to the U.S. Subsequent to her return to the United States, her life was one of writing and speaking. It also included, in 1969, a marriage to Addison Leitch, professor at Gordon Conwell Seminary in Massachusetts. He died in 1973. After his death she married Lars Gren, to whom she was married until her death on June 15, 2015 at her home in Magnolia, Massachusetts.

Elisabeth’s influence continues to span generations through her daily radio program on air for many years and now re-airing in many locations, her rigorous conference schedule, including still referenced messages such as those from the Urbana But it is through her books that her reach spread the furthest. With millions of copies of 21 books in print over the years, one cannot begin to fathom the influence this one surrendered life had on the choices, godliness, and overall sanctification of millions.