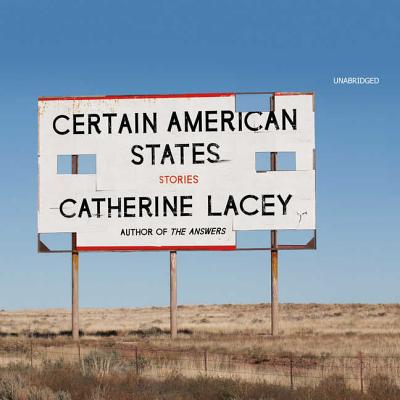 By Catherine Lacey
$29.95
Backordered. Place an order and we will let you know when to expect your book.

From one of Granta's Best of Young American Novelists comes Certain American States, whose insightful and lonely stories beg you to discover the emotional universes hiding at their cores.The winner of a Whiting Award, Catherine Lacey brings her narrative mastery to Certain American States, her first collection of short stories. As with her acclaimed novels Nobody Is Ever Missing and The Answers, she gives life to a group of subtly complex, instantly memorable characters whose searches for love, struggles with grief, and tentative journeys into the minutiae of the human condition are simultaneously gripping and devastating. The characters in Certain American States are continually coming to terms with their place in the world, and how to adapt to that place, before change inevitably returns. A woman leaves her dead husband's clothing on the street, only for it to reappear on the body of a stranger; a man reads his ex-wife's short story and neurotically contemplates whether it is about him; a young woman whose Texan mother insists on moving to New York City with her has her daily attempts to get over a family tragedy interrupted by a mute stranger showing her incoherent messages on his phone. These are stories of breakups, abandonment, and strained family ties; dead brothers and distant surrogate fathers; loneliness, happenstance, starting over, and learning to let go. Lacey's elegiac and inspired prose is at its full power in this collection, further establishing her as one of the singular literary voices of her generation.