The Dream Architects: Adventures in the Video Game Industry (Hardcover) 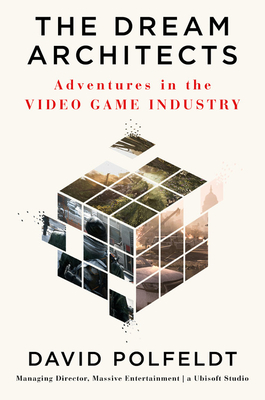 The inside story of the booming video game industry from the late 1990s to the present, as told by the Managing Director of Ubisoft's Massive Entertainment (The Division, Far Cry 3, Assassin's Creed: Revelations).
At Massive Entertainment, a Ubisoft studio, a key division of one of the largest, most influential companies in gaming, Managing Director Polfeldt has had a hand in some of the biggest video game franchises of today, from Assassin's Creed to Far Cry to Tom Clancy's The Division, the fastest-selling new series this generation which revitalized the Clancy brand in gaming.

In The Dream Architects, Polfeldt charts his course through a charmed, idiosyncratic career which began at the dawn of the Sony PlayStation and Microsoft Xbox era -- from successfully pitching an Avatar game to James Cameron that will digitally create all of Pandora to enduring a week-long survivalist camp in the Scandinavian forest to better understand the post-apocalyptic future of The Division.

Along the way, Polfeldt ruminates on how the video game industry has grown and changed, how and when games became art, and the medium's expanding artistic and storytelling potential. He shares what it's like to manage a creative process that has ballooned from a low-six-figure expense with a team of a half dozen people to a transatlantic production of five hundred employees on a single project with a production budget of over a hundred million dollars.
A rare firsthand account of the golden age of game development told in vivid detail, The Dream Architects is a seminal work about the biggest entertainment medium of today.

David Polfeldt is the Managing Director of Massive Entertainment, a world-leading video game studio and part of the Ubisoft family. At Massive, David has worked industry-defining, AAA games such as Assassin's Creed: Revelations, Far Cry 3, and Tom Clancy's The Division, which together have generated billions in revenue worldwide. Massive is currently developing a series of Avatar video games in collaboration with James Cameron and Lightstorm which will be released in conjunction with the forthcoming Avatar movies.

PRAISE FOR THE DREAM ARCHITECTS:

"An entertaining and nuanced look at the human side of digital media."
—Publishers Weekly

"Readers expecting a history of gaming will be pleased to discover this entertaining autobiography....A great storyteller, Polfeldt comes across as truthful and self-effacing...[He] is a dreamer indeed, and gamers are lucky to be invited into his creative worlds."—Booklist

"He saved Massive, he created The Division, and he became a Ubisoft hero. This book is indeed, a documentary of Massive dream architects in the tumultuous history of the game industry."—p.p1 {margin: 0.0px 0.0px 0.0px 0.0px; font: 11.0px Helvetica}span.s1 {font-kerning: none}Hideo Kojima, creator of the Metal Gear Solid series and Death Stranding

"A compelling, insider's story of the video game industry and its journey from a suspicious activity for some and a dubious career choice for others in the late 1990s to the multi-billion-dollar celebrated artform and lifestyle we know today. Like a brilliant game that pulls you in and propels you forward, Polfeldt interweaves his personal story of setbacks and triumphs with a backdrop of legendary people and the games they created to define an industry."—p.p1 {margin: 0.0px 0.0px 0.0px 0.0px; font: 12.0px 'Times New Roman'}Dr. Lisa Su, President and CEO of AMD

"Triple A quality and artistry -- the backbones of the video game industry. David Polfeldt and Massive Entertainment are among the very few who have managed to balance the two, and if either the video games or the artistry were lacking, neither Polfeldt nor Massive Entertainment would have achieved their great successes. Polfeldt's memoir is a guidepost for the industry on how to create both games and art in equal measure."—p.p1 {margin: 0.0px 0.0px 0.0px 0.0px; font: 12.0px 'Times New Roman'}Fumito Ueda, award-winning creator of The Shadow of the Colossus, The Last Guardian, and ICO

"THE DREAM ARCHITECTS is a fascinating look at Swedish game development and a peek behind the curtain of one of the most interesting video game publishers in the world. Full of colorful characters and political machinations, this memoir is a charming collection of anecdotes that highlight the struggles of balancing artistic endeavors with financial realities -- and what it's like to spend a week eating bugs in the woods."—p.p1 {margin: 0.0px 0.0px 0.0px 0.0px; font: 12.0px 'Times New Roman'}Jason Schreier, nationally bestselling author of Blood, Sweat, and Pixels

"In the film industry we would call David Polfeldt an auteur. Someone who possesses a as unique vision and also has multi-disciple skills to pull it off. This book showcases clearly David's uncanny ability to do just this. THE DREAM ARCHITECTS is a phenomenal, behind-the-scenes look into the making of today's video games. It both entertains and enlightens in equal measure."—p.p1 {margin: 0.0px 0.0px 0.0px 0.0px; font: 12.0px 'Times New Roman'}Jon Landau, COO of Lightstorm Entertainment (Titanic, Avatar)

"THE DREAM ARCHITECTS is an amazing, first-hand account of the incredible highs and terrible lows found in the production trenches of the games industry. David's insights on creative leadership and the magic-making of game development are second to none."—p.p1 {margin: 0.0px 0.0px 0.0px 0.0px; font: 12.0px 'Times New Roman'}Martin Walfisz, entrepreneur & investor, founder of Massive Entertainment

PRAISE FOR THE DIVISION SERIES:

"[The Division] has a powerful sense of drama [and] a remarkable sense of pacing and mood. Dynamic."—Wired