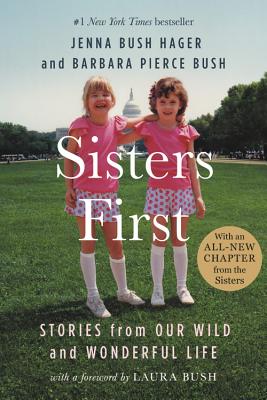 The former first daughters share intimate stories and reflections from the Texas countryside to the storied halls of the White House and beyond.

Jenna Bush Hager is a correspondent on NBC's Today Show and an editor-at-large for Southern Living magazine. She is the author of the New York Times bestseller Ana's Story: A Journey of Hope, written after she served as an intern with UNICEF in Latin America. She also co-authored the children's books Our Great Big Backyard and Read All About It! with her mother. She lives with her husband and two daughters in New York.

Barbara Pierce Bush is the CEO and co-founder of Global Health Corps, an organization that mobilizes a global community of young leaders to build the movement for health equity. GHC has mobilized almost one thousand young leaders who believe health is a human right and who take an innovative approach to solving some of the world's biggest global health challenges. Previously, Barbara worked at the Smithsonian's Cooper-Hewitt, National Design Museum, and Red Cross Children's Hospital in South Africa, and interned with UNICEF in Botswana.