The Mourning Road to Thanksgiving (Paperback) 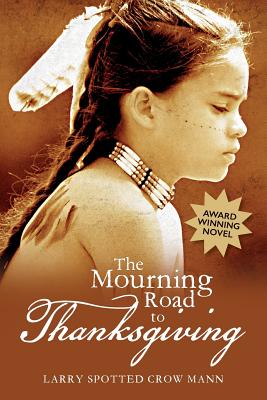 Larry Spotted Crow Mann's groundbreaking novel, The Mourning Road to Thanksgiving is the 2015 WordCraft Circle of Honors Winner: Best Young Adult Novel of the Year This unforgettable story continues to inspire, educate and challenge the notion of a holiday engrained in American history. This riveting tale challenges the narrative and conceptions we have of American history and exposes the untold stories and lingering scars of our past. As equally important, this is a story for our generation. It takes us bravely forward to an understanding and awareness of each other like never before. From laughter to tears, this novel will inspire you and reveal the endless possibilities when we open our hearts. Haunted by his childhood, and furious about the treatment of his people since the landing of Mayflower; a 40-year-old Native American man sets off on an unforgettable quest to heal himself and Native people everywhere. He believes he can accomplish both by putting an end to America's beloved Thanksgiving-Forever. A heart wrenching, daring and sometimes humorous journey that goes far beyond a litany of hardship and loss and will reveal the healing spirit within all of humankind. Order your copy today to find out why readers are saying The Mourning Road to Thanksgiving is one of the best books they have ever read.

Larry Spotted Crow Mann is an award winning writer/poet, performer, Nipmuc cultural educator, Story Teller and Citizen of the Nipmuc Tribe of Massachusetts. He travels throughout the United States, Canada and parts of Europe to schools, colleges, Pow Wows, and other organizations sharing the music, culture, and history of Nipmuc people. He has also given lectures at universities throughout New England on issues ranging from Native American sovereignty, to identity. In 2010, his poetry was a winner in the Memescapes Journal of Fine Arts, and in 2013, his poetry was nominated for the Pushcart Prize. Mann's previous book, Tales From the Whispering Basket is internationally acclaimed and has received excellent reviews. Among his other important work, Mann has worked in collaboration with the Massachusetts Department of Public Health in creating the booklet "Coming Home: A Guide to Help in the Prevention and Treatment of Substance Abuse of Native American Youth". Mann also contributed to the book, by Kathleen Noyes, Ed.D., "Stories of Educational Journeys: Indigenous - Learning & Socio-Cultural Approach in Education." Mann was applauded for his role in the PBS Native American film, "We Shall Remain," directed by Chris Eyre. Mann was also featured in "Living in Two Worlds: Native American Experiences on the Boston Harbor Islands," Winner of the NPS 2007 Award for Interpretive Media. * Publishing's include the "Memescapes Journal of Fine Arts" at Quinsigamond College. * Indian Country Today Magazine * Contributing work in the book, by Margaret Barton, "New England on Fire" * Dawn Land Voices "Native American Anthology of New England," University of Nebraska Press His poetry and quotes have been included in: * Go Green Conference for the Medical Services Administration of Puerto Rico * WordCraft Circle of Native American Writers * "My Heart Is Red Project: A Journey Across the United States and Canada," photography and video of Native Americans, by Mayoke Photography * "Tales from the Whispering Basket" Mann's first book, a compalling collection of short stories and poetry. His current novel, The Mourning Road to Thanksgiving, is the 2015 WordCraft Circle of Honors Winner: Best YA Novel of the year.