From the Ruins of Empire: The Revolt Against the West and the Remaking of Asia (MP3 CD) 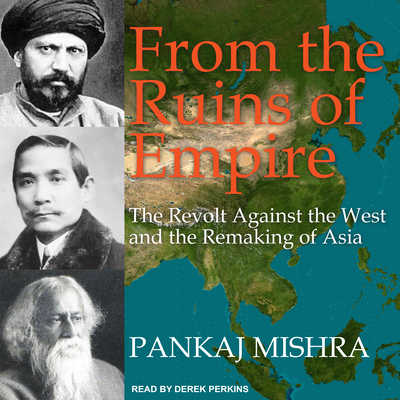 By Pankaj Mishra, Derek Perkins (Narrated by)
Unavailable. Orders will be auto-cancelled.

A little more than a century ago, as the Japanese navy annihilated the giant Russian one at the Battle of Tsushima, original thinkers across Asia, working independently, sought to frame a distinctly Asian intellectual tradition that would inform and inspire the continent's anticipated rise to dominance. Asian dominance did not come to pass, and those thinkers-Tagore, Gandhi, and later Nehru in India; Liang Qichao and Sun Yatsen in China; Jamal al-Din al-Afghani and Abdurreshi al Ibrahim in the ruins of the Ottoman Empire-are seen as outriders from the main anticolonial tradition. But Pankaj Mishra shows that it was otherwise in this stereotype-shattering book. His enthralling group portrait of like minds scattered across a vast continent makes clear that modern Asia's revolt against the West is not the one led by faith-fired terrorists and thwarted peasants but one with deep roots in the work of thinkers who devised a view of life that was neither modern nor antimodern, neither colonialist nor anticolonialist. In broad, deep, dramatic chapters, Mishra tells the stories of these figures, unpacks their philosophies, and reveals their shared goal of a greater Asia.