The Equations of Life: How Physics Shapes Evolution (Hardcover) 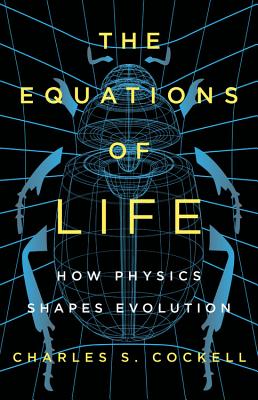 We are all familiar with the popular idea of strange alien life wildly different from life on earth inhabiting other planets. Maybe it's made of silicon! Maybe it has wheels! Or maybe it doesn't. In The Equations of Life, biologist Charles S. Cockell makes the forceful argument that the laws of physics narrowly constrain how life can evolve, making evolution's outcomes predictable. If we were to find on a distant planet something very much like a lady bug eating something like an aphid, we shouldn't be surprised. The forms of life are guided by a limited set of rules, and as a result, there is a narrow set of solutions to the challenges of existence.
A remarkable scientific contribution breathing new life into Darwin's theory of evolution, The Equations of Life makes a radical argument about what life can -- and can't -- be.

Charles S. Cockell is a professor of astrobiology at the University of Edinburgh and the director of the UK Centre for Astrobiology. He lives in Edinburgh, UK.

"In a fascinating journey across physics and biology, Cockell builds a compelling argument for how physical principles constrain the course of evolution."—Science

"Cockell's book lucidly addresses biology's great mystery: If we grant that life is an interplay of chance and necessity, in the words of the French biochemist Jacques Monod, then which has the upper hand?"—New York Times

"If a ladybug lands on you while reading this provocative perspective, don't swat it away before you've taken a good look. Astrobiologist Cockell uses the insect, along with assorted microbes and other earthly residents, to reassess the story of life both on and beyond our planet."—Discover Magazine

"Both magisterial and collegial, this may be the biology book of the year."—Booklist

"Many readers...will relish a lucid, provocative argument that the dazzling variety of organisms produced by 4 billion years of evolution may seem unbounded, but all follow universal laws."—Kirkus Reviews

"Life as we know it arises from an interplay between biological chance and physical necessity. What about life as we don't know it? To think about life on other planets, we need to understand how things could have been different. Charles Cockell's book is a fascinating new look at this question, offering surprising insights on just how constrained biology can be by the laws of physics."—Sean Carroll, author of The Big Picture

"Nature's intricate diversity offers immense challenges to biologists--and inspires the rest of us with wonder and delight. But despite its diversity, the entire biosphere is governed by unifying principles--all living things are assemblages of atoms, governed by gravity and other basic forces. This riveting book--fully accessible to the general reader--shows how all Earthly life (and indeed any alien life elsewhere in the universe) emerges through the operation of basic physical laws and is constrained by what these laws permit. Charles Cockell is not only a fine scientist but a fine writer too." —Lord Martin Rees, Astronomer Royal, past President of the Royal Society

"Want to know about alien life? According to Charles Cockell, you can learn from the living things all around you, right here on Earth. Whether on this third rock from the Sun or another planet in a far-distant galaxy, creatures should share forms and behaviors shaped by the forces of natural selection and the fundamental laws of physics that reign throughout the universe. In this enlightening, entertaining book, Cockell explains how extraterrestrials might not be quite so 'alien' after all."—Lee Billings, author of Five Billion Years of Solitude

"Fascinating.
A profound exploration of the deep nexus between physics and biology."—Andreas Wagner, professor of evolutionary biology at the University of Zürich and author of Arrival of the Fittest

"An intriguing and enthralling adventure into the physics of
life that is all around us and inside us. Cockell provides a reminder of the
seeming rarity of all this beauty but also an invitation to look up to the
skies and ask 'where else might something like this be?'"—Robin Ince, co-host of The Infinite Monkey Cage and co-author of How to Build a Universe (with Brian Cox)