Bound by War: How the United States and the Philippines Built America's First Pacific Century (Hardcover) 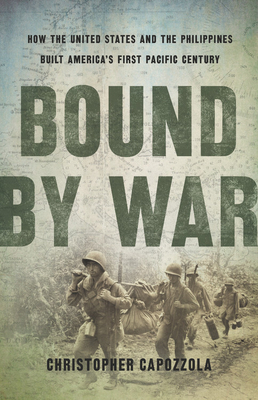 A sweeping history of America's long and fateful military relationship with the Philippines amid a century of Pacific warfare
Ever since US troops occupied the Philippines in 1898, generations of Filipinos have served in and alongside the US armed forces. In Bound by War, historian Christopher Capozzola reveals this forgotten history, showing how war and military service forged an enduring, yet fraught, alliance between Americans and Filipinos.
As the US military expanded in Asia, American forces confronted their Pacific rivals from Philippine bases. And from the colonial-era Philippine Scouts to post-9/11 contractors in Iraq and Afghanistan, Filipinos were crucial partners in the exercise of US power. Their service reshaped Philippine society and politics and brought thousands of Filipinos to America.
Telling the epic story of a century of conflict and migration, Bound by War is a fresh, definitive portrait of this uneven partnership and the two nations it transformed.

Christopher Capozzola is professor of history at MIT. Author of the award-winning Uncle Sam Wants You, he is also a cocurator of "The Volunteers: Americans Join World War I, 1914-1919," a traveling exhibition that originated at The National WWI Museum and Memorial to commemorate the centennial of the First World War. He lives in Boston, Massachusetts.

"Bound by War is a pathbreaking, intimate, panoramic, and impressively binational case study of America's emergence as a Pacific power with the conquest of the Philippines in 1898, and its evolution thereafter, through war and peace, into the gargantuan global military establishment we know today."—John W. Dower, Pulitzer Prize-winning author of Embracing Defeat

"Bound by War is a tour de force. It shows how military service has bound the United States and the Philippines together from the formation of the Macabebes and Philippine Scouts at the dawn of the twentieth century, through the Bataan death march, Cold War campaigns in Korea and Vietnam, and recent interventions in the Middle East. In addition to illuminating how the United States enlisted a core partner in the Pacific, it reveals how talk of brotherhood and shared service have hidden inequities and divergent ambitions."—Kristin Hoganson, author of Fighting for American Manhood

"A must read for Americans and Filipinos who would hardly remember the epic relationship of the United States and Philippines if not for Christopher Capozzola's masterful work chronicling the long, turbulent relationship between the two countries. Full of personal stories, this is America's history of the Philippines, of Filipinos and Filipino Americans' ongoing fight for recognition, and how America's imperial rule still looms over them to this day. We cannot afford to let this history to be shelved and forgotten."—Major General Tony Taguba, US Army Retired, Chairman Filvetrep