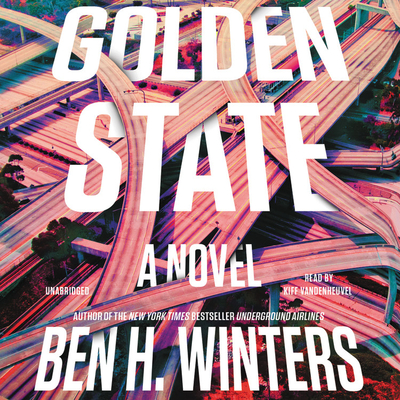 “Golden State is a gripping and brainy page-turner. Winters asks his readers to imagine California as a sovereign (and surveillance) state in which intentionally lying is the greatest federal offense. The ‘Byzantine business of reality maintenance’ is carried out by a team of federal agents, including our hero, Laszlo Ratesic. Golden State is a mystery in both form and content. In addition to the seemingly simple incident Laszlo investigates at the start of the novel, there’s the bigger question of what a novel really is, or means, or can do in the ‘good, golden, safe’ world its readers are transported to. Winters is especially good at keeping his readers off-balance. Not even his biggest fans will see some of the twists and turns he’s built into this, his best book yet.”
— John Francisconi, Bank Square Books, Mystic, CT

From award-winning, New York Times bestselling novelist Ben H. Winters comes a mind-bending novel set in a world governed by absolute truth, where lies are as dangerous as murder.

In a strange alternate society that values law and truth above all else, Laszlo Ratesic is a nineteen-year veteran of the Speculative Service. He lives in the Golden State, a nation standing where California once did, a place where like-minded Americans retreated after the erosion of truth and the spread of lies made public life and governance impossible.

In the Golden State, knowingly contradicting the truth is the greatest crime-and stopping those crimes is Laz's job. In its service, he is one of the few individuals permitted to harbor untruths, to speculate on what might have happened.

But the Golden State is less a paradise than its name might suggest. To monitor, verify, and enforce the truth requires a veritable panopticon of surveillance and recording. And when those in control of the facts twist them for nefarious means, the Speculators are the only ones with the power to fight back.