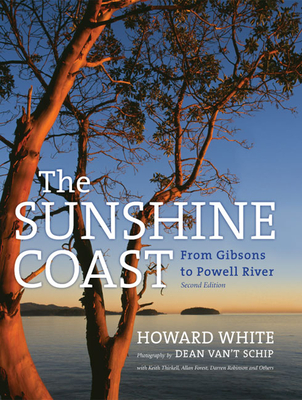 British Columbia's Sunshine Coast is a sublimely scenic 160-kilometre stretch of waterfront between Howe Sound and Desolation Sound, reached by a 40-minute ferry ride from West Vancouver. Join Howard White, award-winning humorist and lifelong coast denizen, on a guided tour from Gibsons, where the long-running TV series The Beachcombers was filmed, to Powell River, the largest community in the region. Along the way, sojourn in Roberts Creek, whose patron saint, the irrepressible Harry Roberts, invented the name "Sunshine Coast." Stop over in Sechelt, named for the Shi'sha'lh or Sechelt Nation who once occupied the bulk of the Sunshine Coast territory. Follow the seriously twisty highway to visit Pender Harbour, where some local fishing folk still do their Saturday shopping in kicker boats. Drop anchor in Princess Louisa Inlet, and discover why the likes of John Barrymore and Andrew Carnegie once came to marvel at its canyon-like splendour.

With paintings by local artists, poems by local poets, tall tales by local characters, miracles by Sechelt medicine men, tips on predicting the weather, a fair share of risqué gossip about historical figures, a good mix of bold opinions and hard facts and over 150 beautiful colour photographs, The Sunshine Coast is a book to be treasured, not just by residents and visitors, but by anyone with an eye for fascinating places. First published in 1996, this fully revised edition contains updated text and all new photographs of coast life from the area's most talented photographers including Dean van't Schip and Keith Thirkell.

Howard White was born in 1945 in Abbotsford, British Columbia. He was raised in a series of camps and settlements on the BC coast and never got over it. He is still to be found stuck barnacle-like to the shore at Pender Harbour, BC. He started Raincoast Chronicles and Harbour Publishing in the early 1970s and his own books include A Hard Man to Beat (bio), The Men There Were Then (poems), Spilsbury's Coast (bio), The Accidental Airline (bio), Patrick and the Backhoe (childrens'), Writing in the Rain (anthology) and The Sunshine Coast (travel). He was awarded the Canadian Historical Association's Career Award for Regional History in 1989. In 2000, he completed a ten-year project, The Encyclopedia of British Columbia. He has been awarded the Order of BC, the Canadian Historical Association's Career Award for Regional History, the Stephen Leacock Medal for Humour, the Jim Douglas Publisher of the Year Award and a Honorary Doctorate of Laws Degree from the University of Victoria. In 2007, White was made an Officer of the Order of Canada. He has twice been runner-up in the Whisky Slough Putty Man Triathlon. Born and raised on BC's beautiful Sunshine Coast, Dean has been photographing the natural environment for over 30 years. His appreciation for the beauty and biodiversity of this unique area comes through in his high definition medium format transparencies and high resolution digital images. Dean is a regular contributor to the stock photo agency All Canada Photos and has had images published in publications such as Over Beautiful BC, the Encyclopedia of BC, Wildflowers of the Pacific Northwest, Pacific Yachting, Whistler the Magazine and Hasselblad Forum. Tourism BC, the Western Canada Wilderness Committee, the Canadian Parks & Wilderness Society and Harbour Publishing have all used his images in books, magazines, calendars, brochures and cards over the past 20 years. He lives in Roberts Creek, BC. Keith Thirkell is a photographer whose work has been featured in Beautiful British Columbia, BC Extreme, the Vancouver Province and the books Sunshine & Salt Air: A Sunshine Coast Visitor's Guide and The Sunshine Coast. He lives in Gibsons, BC. Allan Forest has been a professional photographer since graduating from the Photographic Arts program at Ryerson in Toronto in 1971. After graduation he began a career as a commercial studio photographer with intermittent breaks to travel the world. He moved to Vancouver in 1994 and an interest in computers prompted him to learn graphic design, which he combined with photography and entered the digital world of computer technology. Allan has displated his landscapes in Vancouver and North Vancouver with shows at the Lynnmour Gallery and the Harmony Arts Festival in West Vancouver, as well as various craft shows.

He moved to the Sunshine Coast in 2009 where he took a position at The Local newspaper.