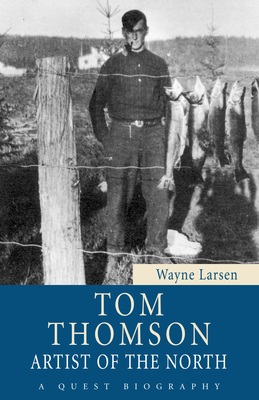 This is book number 28 in the Quest Biography series.

Tom Thomson (1877-1917) occupies a prominent position in Canada's national culture and has become a celebrated icon for his magnificent landscapes as well as for his brief life and mysterious death. The shy, enigmatic artist and woodsman's innovative painting style produced such seminal Canadian images as The Jack Pine and The West Wind, while his untimely drowning nearly a century ago is still a popular subject of fierce debate.

Originally a commercial artist, Thomson fell in love with the forests and lakes of Ontario's Algonquin Park and devoted himself to rendering the north country's changing seasons in a series of colourful sketches and canvases. Dividing his time between his beloved wilderness and a shack behind the Studio Building near downtown Toronto, Thomson was a major inspiration to his painter friends who, not long after his death, went on to change the course of Canadian art as the influential - and equally controversial - Group of Seven.

Wayne Larsen is a Montreal artist, editor, and writer whose work has appeared in a wide variety of publications. Currently, he teaches graduate-level journalism at Concordia University and is the author of A.Y. Jackson: The Life of a Landscape Painter and James Wilson Morrice: Painter of Light and Shadow. He lives in Verdun, Quebec.