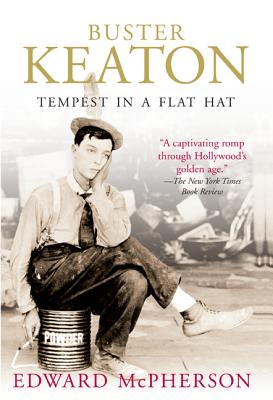 By Edward McPherson
$17.99
Email or call for price.

This “appreciative biography that rolls as smoothly as a film reel” (Cleveland Plain Dealer) celebrates one of cinema’s greatest clowns, painting a detailed portrait of the man behind the mayhem and offering a fresh look at the classic comedies that defined the Golden Age of Silent Film.

Writer—and avowed fan—Edward McPherson takes the reader on a fascinating journey through Buster Keaton’s life and times, from the vaudeville stage to the glittering screens of early Hollywood, where he rivaled even Charlie Chaplin as the master of silent comedy.

Based on extensive research, this biography reveals Keaton in his prime as an antic genius—equal parts auteur, innovator, prankster, and daredevil—focusing on his glorious 1920s films, which “McPherson evokes with insight and enthusiasm” (Washington Post Book World).

Edward McPherson has contributed to such publications as the New York Times Magazine, New York Observer, I.D., Esopus, Absolute, and Talk. Originally from Texas, he lives in Brooklyn, New York.