Words of Light: Inspiration from the Letters of Padre Pio (Paperback) 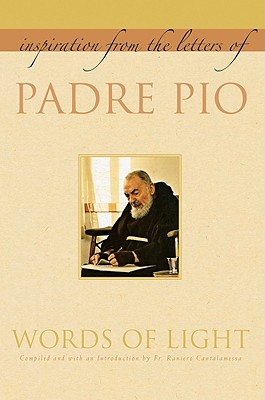 By Padre Pio, Father Raniero Cantalamessa (Introduction by)
$16.99
Out of Stock; Usually Arrives in 5-7 Days

The world was startled in 2007 by revelations that Mother Teresa of Calcutta's spiritual life was full of serious doubts and personal suffering for nearly 50 years. The other great saint of the last half century - Padre Pio - offers similar revelations of his own in this enlightening collection of short excerpts from his letters.

Many books have been written on the life and works of Padre Pio, but Words of Light is not a book about what others think or say about him. Here, he speaks for himself. If you are interested in the complexities and challenges of contemporary faith, you will benefit from these short teachings, counsels, and recollections culled from some of Padre Pio's most personal writings.

In these letters I quickly discovered the same states of soul that were described by the great mystics. Padre Pio's own 'dark night' was in no way inferior to that described by John of the Cross, and equally the 'living flame' of his love for God dazzles the reader and allows them to catch a glimpse of another world.
- Fr. Raniero Cantalamessa, from the Introduction

Padre Pio (1887-1968) was born Francesco Forgione, lived most of his life as a Fransiscan Capuchin friar in Italy, and was canonized by Pope John Paul II in 2002. He became famous for his piety, for his counsel to pilgrims, and for the stigmata visible in his hands. He is widely recognized as the most venerated Catholic saint of the last century.

Fr. Raniero Cantalamessa, the editor of this volume, is a Fransican Capuchin priest and a retired Professor of the History of Ancient Christianity at the Catholic University of Milan. Pope John Paul II appointed him Preacher to the Papal Household, a position that he still holdds. His website is www.cantalamessa.org.