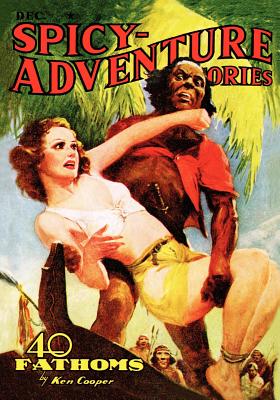 The famous "Spicy" pulp magazines are among the most sought-after publications by collectors. The "Spicies" -- which included Spicy Mystery, Spicy Adventure, Spicy Detective, and others -- published a titilating mix of fantasy, horror, mystery, action-adventure, and suspense, punctuated by episodes of torture, sadism, sex, and other risque elements. Although tame by current standards, and sometimes of dubious literary merit, these publications presented tales which thrilled a sensation-hungry audience. Despite the themes and constraints of the market, writers who would later become famous -- including Hugh B. Cave, E. Hoffman Price, Robert Leslie Bellem, and many more -- were frequent contributors. This issue of Spicy Adventure Stories includes contributions from Robert Leslie Bellem, Lew Merrill (Victor Rousseau), Hugh Speer, Ken Cooper, Clayton Maxwell, Clark Nelson, and Harley L. Court.