Qed: A Play Inspired by the Writings of Richard Feynman and Tuva or Bust!by Ralph Leighton (Applause Books) (Paperback) 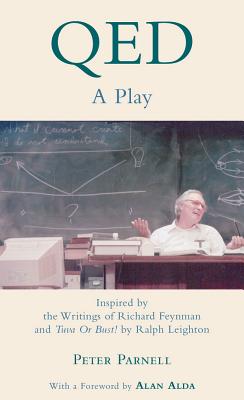 QED is a seductive mix of science, human affections, moral courage and comic eccentricity... not to be missed."- John Simon, New York Magazine The play itself is a kind of proof, dramatically illustrating how a man who happens to be a genius elegantly and movingly works through the human problem of how to face the end of his life." - Nancy Franklin, The New Yorker With a moving and powerful introduction from Alan Alda. Who knew that quantum electrodynamics could make for a dramatic read? In the hands of the late, great physicist Richard Feynman, it does. Feynman's theory of QED is just one of the many topics the playwright Peter Parnell explores in this nearly-one-man show, a recent Broadway triumph for star Alan Alda as Feynman. Set in Feynman's office on the weekend of his realization that he has terminal cancer, this play is an intellectual tour-de-force that captures the unique, hilarious, and puckish genius that Feynman was. From his work on the Manhattan Project to the death of his beloved first wife, from his mission to reconstruct the Challenger space shuttle tragedy to his Nobel-prize winning physics ideas, the resume of Feynman's life is fascinating. But Parnell gives us more, letting fill in the details of his life. When he reads a letter he wrote to his wife after her death, or flirts with a student, or chillingly recalls walking around Manhattan calculating the damage an atomic bomb could do, we, grow to love the man behind the scientist. And we read in fascination as he puzzles out the problem of his own death. Combining the current interest in science and math in the entertainment world with one of the most entertaining scientists in U.S. history, QED is a tour-de-force.