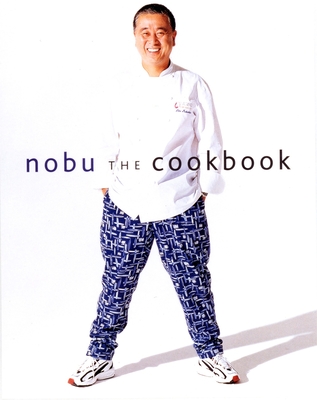 With his multinational and ever expanding empire of thirteen restaurants, Nobu Matsuhisa has become one of the most talked-about international restaurateurs and arguably the world's greatest sushi chef. In his first, long awaited book, Nobu: The Cookbook, Matsuhisa reveals the secrets of his exciting, cutting-edge Japanese cuisine.

Nobu's culinary creations are based on the practice of simplicity the art of using simple techniques to bring out the flavors in the best ingredients the world's oceans have to offer and on his unique combinations of Japanese cuisine and imaginative Western, particularly South American, cooking.

While simplicity may be the rule in his cooking, exotic ingredients are the key to his signature style: in Matsuhisa Shrimp he combines shiitake mushrooms, shiso leaves, and caviar; Octopus Tiradito is made with yuzu juice and rocoto chili paste; he even gives away the secrets to making his world-famous Seafood Ceviche, Nobu Style.

In all, fifty original recipes for fish and seafood are included with step-by-step instructions and lavish color photographs. It features all Nobu's signature dishes along with salads, vegetable dishes, and dessert recipes, while a special chapter about pairing drinks with the meals rounds out the selections. A chapter dedicated to sushi instructs readers how to make Nobu's own original Soft Shell Crab Roll, Salmon Skin Roll and House Special Roll.

Throughout the book the author shares stories of his rich and varied life: his childhood memories of rural Japan; the beginning of his career; his meteoric rise to the top, as one of the most renowned chefs of his generation.

Featuring a preface by Robert De Niro, a foreword by Martha
Stewart and an afterward by Japanese actor Ken Takakura, Nobu: The Cookbook is sure to be the season's hottest cookbook and a sure-fire classic for Japanese cooks and foodies alike.

Tantalizing seafood recipes from the kitchens of a superchef.

"The best food photography I have ever seen...." ?Paul Levy, Wall Street Journal

"In his first cookbook, Nobu: the Cookbook, Nobu Matsuhisa shares the secrets of his trend-setting new-style sashimi, his often-copied black cod with miso, and his sea-urchin tempura (a "Tim Zagat favorite!")…Sprinkled among the intriguing recipes and stunning photographs are an aji-to-yuzu glossary, a shopping guide, and helpful tips on how to de-slime octopus and the proper way to eat sushi (dip the topping, not the rice)." ?New York Magazine

"Those who pursue the pleasures purveyed by Nobu will find this cookbook to be a highly polished gem, and will be able to treat their guests to a symphony of texture and flavors." ?Sacramento Bee

"A hot seller with chefs." ?The Province

"A array of seafood dishes to amaze you." ?The Post and Courier

"The cookbook is a work of art, as are the dishes in it." ?Norwich Bulletin

"... reveals the secrets of his cooking and indeed the essence of all Japanese cuisine." ?Espritline.com

"An essential addition to any collection of chefs' cookbooks." ?Library Journal

"The book may be worth owning on the merits of its photographs alone...." ?John Martin, The Bloomsbury Review

"The instructions for constructing his beautifully compiled dishes are surprisingly easy...." ?Decanter

"In addition to the expected array of cuisine, Nobu educates the reader.... Japanese ingredients, equipment and cutting techniques are demystified." ?GlobalChefs: The Culinary Online Magazine Written by Chefs

"The photos of your food are terrific. But most important, I think, is the story of how you started and who inspired you along the way. It gives insight into who Nobu Matsuhisa is as well as the journey to get where you are today." ?Robert De Niro, from the Preface

"I have been at Nobu's restaurants for many years, and the food, the presentations, and the ambience have always surpassed my expectations. Thank you Nobu!" ?Martha Stewart

"This cookbook is the very best thing next to having Nobu standing next to you in the kitchen telling you what to do." ?Daniel Boulud, Cafe Boulud

"You can tell how much fun a city is going to be if Nobu has a restaurant in it." ?Madonna

"Truly one of the greatest Japanese chefs. It is great food from a great man." ?Emeril Lagasse

"Nobu brilliantly combines flavors and textures of magical ingredients to stimulate the senses. His food is deceptively simple and it is this very subtlety which makes it so special." ?Giorgio Armani

"Chef Nobu Matsuhisa's philosophy of perfection and beauty is reflected by the exquisiteness of his cuisine. His dishes are not just nourishment for the body - they are a delight to the senses, and a soothing balm to the spirit." ?Thomas Keller, The French Laundry