We're Still Here Ya Bastards: How the People of New Orleans Rebuilt Their City (Hardcover) 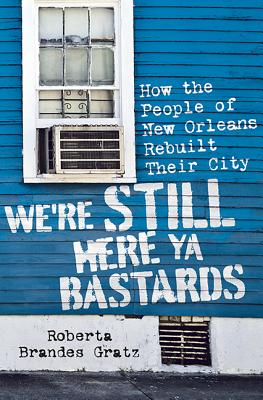 The aftermath of Hurricane Katrina is one of the darkest chapters in American history. The storm caused unprecedented destruction, and a toxic combination of government neglect and socioeconomic inequality turned a crisis into a tragedy. But among the rubble, there is hope.

We're Still Here Ya Bastards presents an extraordinary panoramic look at New Orleans's revival in the years following the hurricane. Award-winning journalist Roberta Brandes Gratz shares the stories of people who returned to their homes and have taken the rebuilding of their city into their own hands. She shows how the city -- from the Lower Ninth Ward to the storied French Quarter to Bayou Bienvenue -- is recovering despite flawed governmental policies that promote disaster capitalism rather than the public good. While tracing positive trends, Gratz also investigates the most fiercely debated issues and challenges facing the city: a violent and corrupt prison system, the tragic closing of Charity Hospital, the future of public education, and the rise of gentrification.

By telling stories that are often ignored by the mainstream media, We're Still Here Ya Bastards shows the strength and resilience of a community that continues to work to rebuild New Orleans, and reveals what Katrina couldn't destroy: the vibrant culture, epic history, and unwavering pride of one of the greatest cities in America.

Roberta Brandes Gratz is an acclaimed urbanist who has published three previous books on the subject, including most recently The Battle for Gotham: New York in the Shadow of Robert Moses and Jane Jacobs. Her writing has also appeared in the Nation, the New York Times Magazine, and the Wall Street Journal. She previously served on the NYC Landmark's Preservation Commission and currently sits on the Sustainability Advisory Board for NYC. She splits her time between New York City and New Orleans.

“A welcome contribution to an animated conversation about the city and its uncertain future… What is most valuable about We're Still Here Ya Bastards at this moment of mass retrospection is its intelligent glance forward at upcoming struggles, and its argument that the actions of elected officials and administrators in Washington, Baton Rouge, and Orleans Parish matter as much now as they have at any time in the past ten years.” —The Architect's Newspaper

“The remarkable book by Roberta Brandes Gratz, We're Still Here Ya Bastards: How the People of New Orleans Rebuilt Their City, is a story about the people of New Orleans overcoming the torpor of government—and sometimes the self-congratulations of government—and the pro-business biases of the development process. Gratz describes community-level activism, both formal and informal, that fights to redevelop New Orleans for New Orleanians. It is a story of grassroots democracy in action.” —Rick Cohen, Nonprofit Quarterly

“Gratz's love for New Orleans, her home since 2007, is evident in the pages of this challenging but rewarding exploration of the city, 10 years post-Katrina. Gratz (The Battle for Gotham) clearly did her homework.” —Publishers Weekly

“Gratz writes with clear affection for the people, neighborhoods, and unique culture of New Orleans...Recommended for any reader interested in New Orleans and also for those looking for an intelligent and readable book about urban planning or community activism.” —Library Journal

"Gratz provides a moving chronicle of the efforts of real people to rebuild their battered city in the face of bad engineering, cynical politicians, incompetent bureaucrats and greedy developers. It frames the challenges urban revitalization, inequality and gentrification in a smart and nuanced way. This book is an absolute must read for anyone who cares about the future of our communities and nation." —Richard Florida, author of The Rise of the Creative Class and professor at NYU

“Roberta Gratz knows as much about the way cities work as anyone alive. In We're Still Here Ya Bastards she turns her sharp, experienced eye on New Orleans, post-Katrina, and delivers a lucid assessment of the city's stunning progress as well as its chronic, sometimes toxic, problems. Drawing on a broad variety of voices, this is a valuable addition to the growing body of literature about this most complex and beautiful city.” —Tom Piazza, author of Why New Orleans Matters and City of Refuge

“New Orleanians don't often light out for the territories. So there was no question of their returning from mandatory exile to this semi-ruined city and rebuilding from the ground up. As Roberta Gratz shows in this brilliant book, it was their grassroots activism, reinforced by cadres of voluntourists who came for a week then decided to stay put, that has been bringing this storied town back from disaster.” —Lawrence N. Powell, author of The Accidental City: Improvising New Orleans

“Roberta Gratz is America's most innovative urban chronicler of our time. If you really want to know the true story of New Orleans after Katrina, you must read her thorough account of one of America's devastating natural disasters.” —Laurie Beckelman, cultural consultant and former Chair of the New York City Landmarks Preservation Commission

“Disaster, even terrible disaster, can also be an opportunity. A decade after Hurricane Katrina, Roberta Gratz offers a sharp take on what a recovering New Orleans got right — and wrong. Her assessment is sure to provoke debate. But no one who cares about ‘The City that Care Forgot' can ignore this detailed and deeply humane report.” —Jed Horne, author of Desire Street and Breach of Faith

“No major American event of this century has generated so much myth as the 2005 flooding of New Orleans. Roberta Gratz tackles these assumed truths with two essential tools: the tenacity of an old-style journalist and the devotion of a Jane Jacobs-style urbanist. She chronicles the city's improbable and unpredicted recovery, without the dubious help of big plans, a recovery that, like her reporting, was and is literally ground-up. Most important to me, she writes not only with understanding, but with deep affection for this incomparable city.” —Harry Shearer

“Do we need another Katrina book? No. Not just any book. We need this one. Whether the subject is education, healthcare, urban development or environmental preservation, Roberta Gratz has masterfully assembled a chorus of New Orleans voices to tell the story of their city. This book is a clarion call to the nation and the world.” —Lolis Eric Elie, story editor, HBO's Treme

"After the Katrina and BP oil-spill disasters, officials in New Orleans only made matters worse through incompetence and self-dealing. It took the unelected citizenry to rise up and put things right. It's a hell of a story, painstakingly reported and recounted here in stirring detail." —John Berendt, author of Midnight in the Garden of Good and Evil

“We're Still Here Ya Bastards is a colorful, authoritative account of how the unsung people of New Orleans – instead of inept Federal agencies, crooked local ‘leaders' and soulless developers – refused to let a great American city die.” —Curtis Carter Wilkie, co-author of City Adrift: New Orleans Before and After Katrina

“What happens when one of the United States's urban treasures is damaged, seemingly beyond repair? How does the nation respond—and what does the response tell us of the state of the union? We're Still Here Ya Bastards brings to life the immediacy of the struggles to rebuild New Orleans in the aftermath of Hurricane Katrina. If you have wondered what has happened in the decade since television cameras recorded the drowning of a great American city—from the Ninth Ward to Lakeview, from the French Quarter and Treme through Uptown and Mid-City—Roberta Gratz's page-turning account is for you. As a native New Orleanian, I am grateful to her for uncovering these critical histories.” —Leslie Harris, Associate Professor of History and African American Studies, Emory University

“A great American story: how people who love New Orleans keep saving it, and big money and bad government keep screwing it over.” —Roy Blount Jr., author of Feet on the Street: Rambles Around New Orleans

“Hands down, the winner for best title is We're Still Here Ya Bastards: How the People of New Orleans Rebuilt Their City...(Admit it, you smiled when you read that title.) Gratz, a distinguished urbanist and the author of The Battle for Gotham: New York in the Shadow of Robert Moses and Jane Jacobs, came to New Orleans to cover the storm, and ended up moving here part time. So she has a stake in the New Orleans story. Her book covers the grass-roots efforts, including a fine chapter on Women of the Storm, that have helped restore the city's vitality, and the challenges that still lie ahead — violence and crime, health care for everyone, the changing education system and gentrification.” —Susan Larson, New Orleans Advocate

“It's the city's density, its architecture, streetscape and potential that attract Gratz, an urbanist who has made New Orleans her second home….Gratz's account is strongest when delivering a David-versus-Goliath narrative, as when she champions the determination of those rebuilding their family homes without funds or official sanction.” —New York Times Book Review