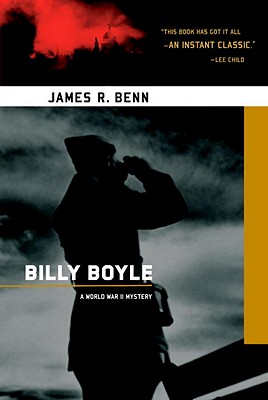 By James R. Benn
$14.00
It's complicated, and may be unavailable. Place an order and we will contact you with the expected arrival date.

What's a twenty-two-year-old Irish American cop who's never been out of Massachusetts before doing at Beardsley Hall, an English country house, having lunch with King Haakon of Norway? Billy Boyle himself wonders. Back home in Southie, he d barely made detective when war was declared. Unwilling to fight and perhaps die for England, he was relieved when his mother wangled a job for him on the staff of a general married to her distant cousin. But the general turns out to be Dwight D. Eisenhower, whose headquarters are in London, which is undergoing the Blitz. And Uncle Ike wants Billy to be his personal investigator.
Billy is dispatched to the seat of the Norwegian government in exile. Operation Jupiter, the impending invasion of Norway, is being planned, but it is feared that there is a German spy amongst the Norwegians.
Billy doubts his own abilities, with good reason. A theft and two murders test his investigative powers, but Billy proves to be a better detective than he or anyone else expected.

James R. Benn is the author of the Billy Boyle World War II mystery series: Billy Boyle, The First Wave, Blood Alone, Evil for Evil, Rag & Bone, A Mortal Terror, and the forthcoming Death's Door. He has been a librarian for many years. He lives in Hadlyme, Connecticut.

"This book has got it all—an instant classic."—Lee Child

"One of the best books I've read this year."—Mystery Scene

"The sense of place is sensational, a wonderful backdrop to this complex and intriguing story."—Mystery News

"A fascinating mystery with the sensibility of a World War II movie."—Sacramento News & Review

“This book has got it all—an instant classic.”—Lee Child, author of The Hard Way

“It is a pleasure marching off to war with the spirited Billy Boyle. He is a charmer, richly imagined and vividly rendered, and he tells a finely suspenseful yarn.”—Dan Fesperman, author of The Prisoner of Guantanamo