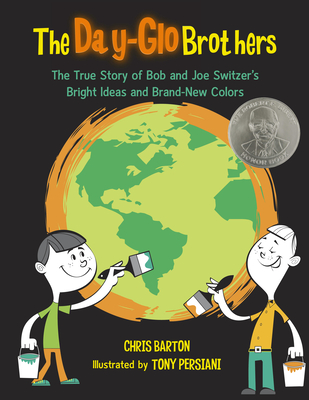 A discovery that made the world a brighter place!

Joe and Bob Switzer were very different brothers. Bob was a studious planner who wanted to grow up to be a doctor. Joe dreamed of making his fortune in show business and loved magic tricks and problem-solving.

When an accident left Bob recovering in a darkened basement, the brothers began experimenting with ultraviolet light and fluorescent paints. Together they invented a whole new kind of color, one that glows with an extra-special intensity—Day-Glo.

This cover reproduction is not printed with Day-Glo colors. The actual book, however, is printed using three Day-Glo colors: Saturn Yellow, Fire Orange, and Signal Green.

Chris Barton writes about books for children and young adults on his blog "Bartography." He is the author of SHARK VS. TRAIN, CAN I SEE YOUR ID?, and THE DAY-GLO BROTHERS. Chris lives in Austin, Texas.

♦ The Switzer brothers were complete opposites. Older brother Bob was hardworking and practical, while younger brother Joe was carefree and full of creative, wacky ideas. However, when an unexpected injury forced Bob to spend months recovering in a darkened basement, the two brothers happened upon an illuminating adventure—the discovery of Day-Glo colors. These glowing paints were used to send signals in World War II, help airplanes land safely at night and are now found worldwide in art and advertisements (not to mention the entire decade of 1980s fashion). Through extensive research, including Switzer family interviews and Bob's own handwritten account of events, debut author Barton brings two unknown inventors into the brilliant light they deserve. Persiani, in his picture-book debut as well, first limits the palette to grayscale, then gradually increases the use of color as the brothers' experiments progress. The final pages explode in Day-Glo radiance. Rendered in 1950s-cartoon style, with bold lines and stretched perspectives, these two putty-limbed brothers shine even more brightly than the paints and dyes they created.


♦ In this debut for both collaborators, Barton takes on the dual persona of popular historian and cool science teacher as he chronicles the Switzer brothers' invention of the first fluorescent paint visible in daylight. The aptly named Day-Glo, he explains, started out as a technological novelty act (Joe, an amateur magician, was looking for ways to make his illusions more exciting), but soon became much more: during WWII, one of its many uses was guiding Allied planes to safe landings on aircraft carriers. The story is one of quintessentially American ingenuity, with its beguiling combination of imaginative heroes (“Bob focused on specific goals, while Joe let his freewheeling mind roam every which way when he tried to solve a problem”), formidable obstacles (including, in Bob's case, a traumatic accident), a dash of serendipity and entrepreneurial zeal. Persiani's exuberantly retro 1960s drawings—splashed with Day-Glo, of course—bring to mind the goofy enthusiasm of vintage educational animation and should have readers eagerly following along as the Switzers turn fluorescence into fame and fortune.