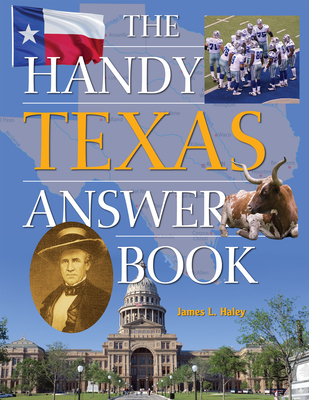 A fascinating and fun look at the Lone Star State's history, culture, and people

Texas is the country's second-largest state by size and population. It has a unique and varied history, having been ruled by a succession of nations--from which the term "six flags over Texas" sprang--before becoming an independent republic. From its traditional oil, cattle, and cotton industries to the modern energy, electronics, computer, aerospace, and biomedical industries, Texas has become an economic powerhouse. It's known for its low taxes, diverse population, thriving universities, and art scenes. Exploring the state's fascinating history, people, myths, culture, and trivia, The Handy Texas Answer Book takes an in-depth look at this fascinating and diverse state with the bigger-than-life personality.

Learn about the original Indigenous peoples, the Spanish, French, and Mexican colonizations, the independence from Mexico, the ties to the Confederacy and United States, devastating hurricanes, football culture, fast-growing cities and urban sprawl, food, attitude, and much, much more. Tour landmarks from the Alamo and cattle ranches to the Rio Grande and the state capital. Learn about famous sons and daughters, including Lyndon Johnson, Sam Houston, Howard Hughes, Janis Joplin, and Ren e Zellweger. Sports, the government, parks, and cultural institutions are all packed into this comprehensive guide to the state of Texas. Find answers to more than 950 questions, including:

What accounts for Texas's odd shape? Why was Sam Houston such a polarizing figure? Why did Mexico invade Texas in 1842? What was the origin of the rodeo? What were the final terms on which Texas entered the Union? What Texas country boy changed Texas law forever by breaking his leg? What are the natural divisions within the Panhandle-Plains? How did Texas become such a locus of evangelical churches? How big do alligators get in Texas? What was the world's first enclosed, air-conditioned sports stadium? How many rattlesnakes are dispatched at the Sweetwater Rattlesnake Roundup? Is it true that the modern computer chip began in Texas?

Illustrating the unique character of the state through a combination of facts, stats, and history, as well as the unusual and quirky, The Handy Texas Answer Book answers intriguing questions about people, places, events, government, and places of interest. This informative book also includes a helpful bibliography, appendix of governors and presidents, thorough historical timeline, and an extensive index, adding to its usefulness.

James L. Haley is one of Texas's most distinguished historians. His first book, The Buffalo War, remains the definitive history of the last Indian war on the South Plains and has been in print for forty years. His biography, Sam Houston, won nine different awards, including the Tullis Prize of the Texas State Historical Association, the Spur Award of the Western Writers of America, and the Book Award of the Philosophical Society of Texas. His 650-page compendium of Texas history, Passionate Nation, won the T. R. Fehrenbach Book Award of the Texas Historical Commission. Most recently, after ghost writing the memoirs of famous Texas Ranger Joaquin Jackson, he completed a history of the Texas Supreme Court for the University of Texas Press; his latest books, The Shores of Tripoli (2016), A Darker Sea (2017), and the upcoming The Devil in Paradise, are in the Bliven Putnam Naval Adventure Series for G. P. Putnam's Sons. Haley grew up in Fort Worth, graduated summa cum laude from the University of Texas at Arlington, and attended the UT School of Law in Austin. He resides in Austin, Texas.