Play Big: Lessons in Being Limitless from the First Woman to Coach in the NFL (Hardcover) 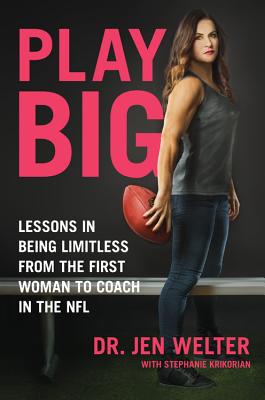 An inspiring, gutsy handbook for success from the first woman to ever coach in the NFL

When Jen Welter became a linebackers coach for the Arizona Cardinals in 2015, she was the first woman to ever break the glass sideline of the NFL. In Play Big, Welter reveals the grit that it took to be a trailblazer in the ultimate boys' club.

Pre-NFL, Welter was an undersized, underestimated athlete who made sacrifice after sacrifice to achieve her football dreams -- rising to the top of women's football leagues and eventually daring to play against men twice her size. Play Big lays out how she succeeded despite the odds, through force of will and determination, revealing the wisdom Welter gained over countless setbacks and challenges. With vivid wit and candor, Play Big will coach you to do the same -- whatever your obstacles might be -- while translating Welter's hard-earned advice for cultivating true perseverance and toughness.

Dr. Jen Welter is the first female to coach in the NFL. In summer 2015, she served as a linebackers' coach for the Arizona Cardinals. She appears regularly as an NFL and sports analyst on NBC, ESPN, and the NFL Network and in national newspapers and other publications. Welter has become a regular empowerment and sports speaker, asked to stump for Hillary Clinton on the election trail in 2016, and sharing the stage at events with sports and political giants like Serena Williams and Condoleeza Rice at events across the country. ESPNW just named her one of the twenty-five most influential women in sport in 2015.

Welter holds a doctorate degree in Psychology, a Master's in Sport Psychology, and a bachelor's degree from Boston College. She has eighteen years of experience in fitness and as a professional athlete. Welter is a native of Vero Beach, Florida.

"When I met Jen, I saw the passion in her. Not just in her voice or a particular word she said-in her whole person. It was easily recognizable that the insights and experience were there. Her resume spoke for itself. But her enthusiasm about the game, her expertise, and being able to teach what she knew, I thought was very evident in the first meeting. That's why I hired her. Anyone reading this book will be inspired by her drive and learn from her journey. She has a different perspective on how to teach that extends beyond the field."
--- Bruce Arians, Arizona Cardinals Head Coach


"Jen Welter is a master of change, not only for the NFL but for women in society. I'm proud of everything that she has done to change perception and reality for the Next Generation. Jen is a force and is one of the most qualified people I know on change."
--- Nancy Lieberman, Sacramento Kings Assistant Coach, Basketball Hall of Fame Member


"If you're thinking about taking a road less traveled, then Play Big is the book for you! Dr. Jen Welter does a great job describing what it takes to be a pioneer in sports and how to break down barriers."
--- Warren Moon, Pro Football Hall of Fame Quarterback, 2006

"Every human being has days when they lack confidence and motivation for their dreams. Reading this book is literally having NFL's first female coach cheering you on to get out there and fight for what you deserve. Jen's candid voice, perseverance, and vivid anecdotes will give you the inspiration to tackle anything."
--- Claudia Chan, CEO of S.H.E. Summit & Author of This Is How We Rise

"Play Big serves as inspiration for anyone who wants to shatter tradition. Dr. Jen Welter's journey gives great insight into working in sports and making your dreams a reality."
--- Dave Meltzer, CEO of Sports 1 Marketing, and Bestselling Author