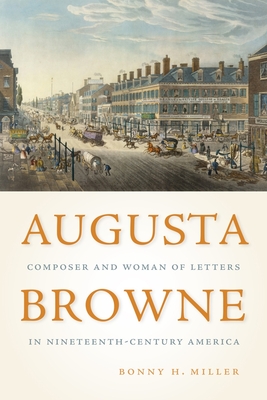 Augusta Browne's five-decade career in music and letters reveals a gifted composer and author. Hailed as one of the most prolific women composers in the USA before 1870, Augusta Browne Garrett (c. 1820-1882) was also a dedicatedmusic educator and music journalist. The Americanness of her story resounds across the decades: an earnest little girl growing up amidst a troubled family business; a young professor of music who burst onto the New York City musical scene; and an entrepreneur who resolutely sought publication of her music and prose to her final day. In Augusta Browne: Composer and Woman of Letters in Nineteenth-Century America, author Bonny Miller presents Browne'sunfamiliar story, assesses her musical works, and describes her literary publications. Browne's outsider status and self-agency offer a potent narrative that transcends antebellum and Victorian-era norms. She used the public arena of newspapers and magazines as conduits for her work during an era when women were ridiculed for public speaking. And yet in many ways her persona as a tenacious entrepreneur conflicted with her adherence to strict Christian precepts, despite her assertion of woman's equality with man. Making use of recently digitized sheet music as well as archives of newspapers and books of the period, Miller's narrative provides the first-ever comprehensive, nuanced account of this notable life in American music.