From a Watery Grave: The Discovery and Excavation of La Salle's Shipwreck, La Belle (Hardcover) 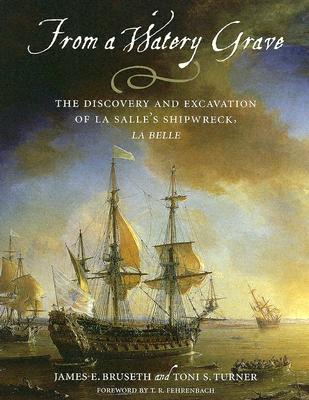 By James E. Bruseth, Toni S. Turner, T. R. Fehrenbach (Foreword by)
Email or call for price
Out of Print

On a frigid, stormy day in February of 1686, a small French sailing ship lost control and ran aground in Matagorda Bay. The crew had braved an ocean voyage, attacks by pirates, raids by Native Americans, and ravaging diseases under the command of famed explorer Robert Cavelier, Sieur de La Salle, hoping to establish a colony in the New World. Pounded in the Texas bay by gale winds and storm surges, La Belle finally slipped beneath the water and sank to the bottom, where it would remain for centuries.

Authors James E. Bruseth and Toni S. Turner use vivid photographs and engaging descriptions to share the excitement of discovery as they piece together both the ship and its tragic story. For those interested in history, archaeology, or the quest for clues to the past, From a Watery Grave tells a riveting tale of nautical adventure in the seventeenth century and reveals modern scientific archaeology at its best.

James E. Bruseth is director of the archaeology division at the Texas Historical Commission, which sponsored the excavation of La Belle. Bruseth directed the excavation and serves as the project’s principal investigator.Toni S. Turner is a freelance writer and fund raiser who assisted in many aspects of the recovery of the shipwreck.