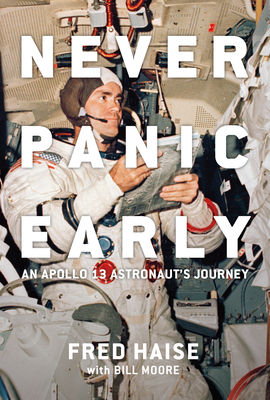 The extraordinary autobiography of astronaut Fred Haise, one of only 24 men to fly to the moon

In the gripping Never Panic Early, Fred Haise, Lunar Module Pilot for Apollo 13, offers a detailed firsthand account of when disaster struck three days into his mission to the moon. An oxygen tank exploded, a crewmate uttered the now iconic words, “Houston, we’ve had a problem here,” and the world anxiously watched as one of history’s most incredible rescue missions unfolded. Haise brings readers into the heart of his experience on the challenging mission--considered NASA’s finest hour--and reflects on his life and career as an Apollo astronaut.

In this personal and illuminating memoir, illustrated with black-and-white photographs, Haise takes an introspective look at the thrills and triumphs, regrets and disappointments, and lessons that defined his career, including his years as a military fighter pilot and his successful 20-year NASA career that would have made him the sixth man on the moon had Apollo 13 gone right.

Many of his stories navigate fear, hope, and resilience, like when he crashed while ferrying a World War II air show aircraft and suffered second and third-degree burns over 65 percent of his body, putting him in critical condition for ten days before making a heroic recovery. In Never Panic Early, Haise explores what it was like to work for NASA in its glory years and demonstrates a true ability to deal with the unexpected.

FRED HAISE served as a backup Lunar Module Pilot for Apollo 8 and Apollo 11 before serving as the Lunar Module Pilot for the Apollo 13 mission. He worked with NASA for nine years after Apollo 13, serving on the backup crew for Apollo 16, commanding free flight test missions for the Space Shuttle program, and was scheduled to command Apollo 19 before its cancellation. He left NASA in 1979 to work as an executive for Grumman Aerospace Corp. BILL MOORE is the author and coauthor of several books and periodical stories about aviation and space, and he produced the documentary counterpart to his book Oklahomans and Space.

CHOICE
"The details and harrowing aspects of surviving the explosion aboard Apollo 13 are recounted in a very engaging manner. [...] The book includes black-and-white photos and will be enjoyed by scholars as well as space enthusiasts."

BOOKLIST
"This memoir eschews self-revelation in favor of a focus on the work. It's dense with detail of the day-to-day reality of being a Marine pilot, engineer, and astronaut, filled with acronyms and technical jargon. It's a down-to-Earth counterpoint to the typical dramatizations about the space race."

THE SPACE REVIEW
"Never Panic Early is a straightforward autobiography about a man who will be forever linked with Apollo 13, but whose career in the military, at NASA, and in industry goes far beyond that single spaceflight."

“A must read for all who like a fascinating story about the development of the ultimate NASA test pilot, aerospace engineer, and program manager in a field where failure is not an option. Though he is best known for being the lunar module pilot on Apollo 13, Fred was a real standout in the early space shuttle landing test program development. Fred’s early life in Biloxi, flight training, fighter pilot days, and later program management experiences round out a truly great read.”
—Bill Anders, Apollo 8 lunar module pilot

“For those who are aerospace program enthusiasts or participants, the names, places, and events in this book will resonate. But this book is more than a chronology of events. In Never Panic Early Fred candidly describes how his values and training prepared him for the defining moments he has encountered throughout his life.”
—Bob Sieck, former NASA launch director

“No other astronaut can match Fred Haise’s life perspective on Apollo’s accomplishments. Never Panic Early carries the reader through Fred’s personal preparation, which readied him for the challenges as the lunar module pilot of the Apollo 13 crisis, and through the trials and joys of a fantastically productive life after Apollo."
—Harrison H. Schmitt, Apollo 17 lunar module pilot and former United States Senator