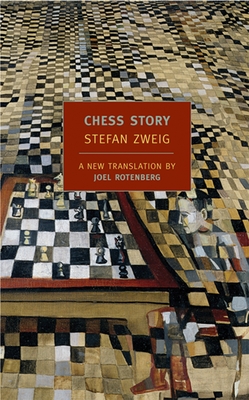 By Stefan Zweig, Joel Rotenberg (Translated by), Peter Gay (Introduction by)
$14.95
On Our Shelves Now

Chess Story, also known as The Royal Game, is the Austrian master Stefan Zweig's final achievement, completed in Brazilian exile and sent off to his American publisher only days before his suicide in 1942. It is the only story in which Zweig looks at Nazism, and he does so with characteristic emphasis on the psychological.

Travelers by ship from New York to Buenos Aires find that on board with them is the world champion of chess, an arrogant and unfriendly man. They come together to try their skills against him and are soundly defeated. Then a mysterious passenger steps forward to advise them and their fortunes change. How he came to possess his extraordinary grasp of the game of chess and at what cost lie at the heart of Zweig's story.

This new translation of Chess Story brings out the work's unusual mixture of high suspense and poignant reflection.

Stefan Zweig (1881-1942), novelist, biographer, poet, and translator, was born in Vienna into a wealthy Austrian Jewish family. During the 1930s, he was one of the best-selling writers in Europe, and was among the most translated German-language writers before the Second World War. With the rise of Nazism, he moved from Salzburg to London (taking British citizenship), to New York, and finally to Brazil, where he committed suicide with his wife. New York Review Books has published Zweig’s novels The Post-Office Girl and Beware of Pity as well as the novella Chess Story.

Peter Gay is Director of the Center for Scholars and Writers at the New York Public Library. He wrote Schnitzler’s Century: The Making of Middle-Class Culture, 1815–1914.

"[Zweig is a] writer who understands perfectly the life he is describing, and who has great analytic gifts . . . . He has achieved the very considerable feat of inventing, in his description of the game of chess, a metaphor for the terribly grim game he is playing with his Nazi tormentors . . . the case history here is no longer that of individuals; it is the case history of Europe." —Stephen Spender, The New York Review of Books

"Always [Zweig] remains essentially the same, revealing in all . . . mediums his subtlety of style, his profound psychological knowledge and his inherent humaneness." —Barthold Fles, The New Republic