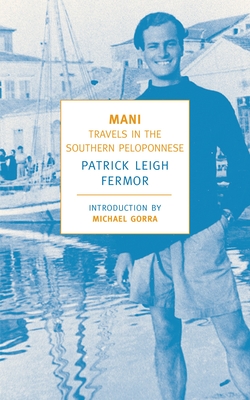 Join a classic adventurer on his travels throughout southern Greece, where he explores remote villages, swims in the Aegean and Ionian seas, and finds history wherever he goes.

The Mani, at the tip of Greece’s—and Europe’s—southernmost promontory, is one of the most isolated regions of the world. Cut off from the rest of the country by the towering range of the Taygetus and hemmed in by the Aegean and Ionian seas, it is a land where the past is still very much a part of its people’s daily lives.

Patrick Leigh Fermor, who has been described as “a cross between Indiana Jones, James Bond, and Graham Greene,” bridges the genres of adventure story, travel writing, and memoir to reveal an ancient world living alongside the twentieth century. Here, in the book that confirmed his reputation as one of the English language’s finest writers of prose, Patrick Leigh Fermor carries the reader with him on his journeys among the Greeks of the mountains, exploring their history and time-honored lore.

Patrick Leigh Fermor (1915-2011) was an intrepid traveler, a heroic soldier, and a writer with a unique prose style. After his stormy schooldays, followed by the walk across Europe to Constantinople that begins in A Time of Gifts (1977) and continues through Between the Woods and the Water (1986), he lived and traveled in the Balkans and the Greek Archipelago. His books Mani (1958) and Roumeli (1966) attest to his deep interest in languages and remote places. In the Second World War he joined the Irish Guards, became a liaison ofﬁcer in Albania, and fought in Greece and Crete. He was awarded the DSO and OBE. He lived partly in Greece—in the house he designed with his wife, Joan, in an olive grove in the Mani—and partly in Worcestershire. He was knighted in 2004 for his services to literature and to British–Greek relations.

Michael Gorra is the author of, among other books, The Bells in Their Silence: Travels through Germany and Portrait of a Novel: Henry James and the Making of an American Masterpiece, a finalist for the Pulitzer Prize. He teaches English at Smith College.

"His greatest book, Mani, was about a journey through that little-known and, at the time, archaic region….[He] travelled [sic] simply, staying with fishermen and farmers, which enabled him to capture the essence of the region….Almost every page has its own literary tour de force, often with intimidating displays of learning and research mixed with fantasy, imagination and acute descriptions of the scene itself." — Robin Hanbury-Tenison, Geographical

"Patrick Leigh Fermor has written great travel books besides Roumeli and Mani, but I like to think that his extraordinary style is especially well suited to the subject of Greece, that the beautiful cragginess and almost blinding brilliance of his prose correspond particularly to that country’s rugged, dazzled landscapes. Here Fermor establishes an ideal of travel writing: no one responds to a people and a place with more erudition and sensitivity." — Benjamin Kunkel

"A really beautiful book of travel in an almost wholly unknown part of Europe, among people who still belong largely to the tough simple Middle Ages; and it shows not only their charm and vigor, but the delights which still await the explorer of Greece." — Gilbert Highet

"Mani and Roumeli: two of the best travel books of the century." — Financial Times

“A unique mixture of hero, historian, traveler and writer; the last and the greatest of a generation whose like we won't see again.”–Geographical

“The finest traveling companion we could ever have . . . His head is stocked with enough cultural lore and poetic fancy to make every league an adventure.” –Evening Standard

If all Europe were laid waste tomorrow, one might do worse than attempt to recreate it, or at least to preserve some sense of historical splendor and variety, by immersing oneself in the travel books of Patrick Leigh Fermor.”—Ben Downing, The Paris Review