The Mad and the Bad (Paperback) 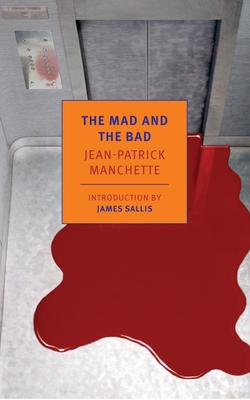 Winner of the French-American Foundation Translation Prize for Fiction

Michel Hartog, a sometime architect, is a powerful businessman and famous philanthropist whose immense  fortune has just grown that much greater following the death of his brother in an accident. Peter is his orphaned nephew—a spoiled brat. Julie is in an insane asylum. Thompson is a hired gunman with a serious ulcer. Michel hires Julie to look after Peter. And he hires Thompson to kill them. Julie and Peter escape. Thompson pursues. Bullets fly. Bodies accumulate.

The craziness is just getting started.

Like Jean-Patrick Manchette’s celebrated Fatale, The Mad and the Bad is a clear-eyed, cold-blooded, pitch-perfect work of creative destruction.

Jean-Patrick Manchette (1942–1995) was a genre-redefining French crime novelist, screenwriter, critic, and translator. Born in Marseille to a family of relatively modest means, Manchette grew up in a southwestern suburb of Paris, where he wrote from an early age. While a student of English literature at the Sorbonne, he contributed articles to the newspaper La Voie communiste and became active in the national students’ union. In 1961 he married, and with his wife Mélissa began translating American crime fiction—he would go on to translate the works of such writers as Donald Westlake, Ross Thomas, and Margaret Millar, often for Gallimard’s Série noire. Throughout the 1960s Manchette supported himself with various jobs writing television scripts, screenplays, young-adult books, and film novelizations. In 1971 he published his first novel, a collaboration with Jean-Pierre Bastid, and embarked on his literary career in earnest, producing ten subsequent works over the course of the next two decades and establishing a new genre of French novel, the néo-polar (distinguished from traditional detective novel, or polar, by its political engagement and social radicalism). During the 1980s, Manchette published celebrated translations of Alan Moore’s Watchmen graphic novels for a bande-dessinée publishing house co-founded by his son, Doug Headline. In addition to Fatale (also available as an NYRB Classic), Manchette’s novels Three to Kill and The Prone Gunman, as well as Jacques Tardi’s graphic-novel adaptations of them (titled West Coast Blues and Like a Sniper Lining Up His Shot, respectively), are available in English.

James Sallis’s recent and forthcoming books include the novel Others of My Kind, a reissue of his novel Death Will Have Your Eyes, and Black Night’s Gonna Catch Me Here: Selected Poems 1968-2012. He is also the author of Drive and of Chester Himes: A Life, and the translator of Raymond Queneau’s novel Saint Glinglin.

"[Manchette's] writing is lean and relentless, a brutal evocation of a world in which conventional morality is just another lie we tell ourselves...The Mad and the Bad is so dark it redefines noir: bleak and pointed, yes, but also infused with an understanding that what passes between us is not only compromised but more often faithless, less a matter of commitment or connection than a kind of unrelenting animal need." —David L. Ulin, Los Angeles Times
"A beautiful woman is freed from an insane asylum by a rich philanthropist who wants her to care for his nephew. But when the nanny and her charge are kidnapped, it’s not the ransom plot it appears—in fact, as they escape and flee the gunmen hired to kill them, the truth of the situation is clearly a metaphor for the left-leaning author’s deep cynicism about French society. Scenes play out like an art film—Manchette was also a screenwriter—right up until the prolonged, blood-splattered finale." —Booklist

“This early masterpiece by Jean-Patrick Manchette shows him in most glorious, coldest fury, wrapping a scathing critique of the excesses of greed and capitalism in the bloody bow of a chase thriller. You’ll want to turn the pages of The Mad and the Bad at the fastest possible clip, but slow down a little and you’ll see how much Manchette packs in—and how much of a punch this mean little book packs.” —Sarah Weinman, Editor of Troubled Daughters, Twisted Wives

“‘The crime novel,’ [Manchette] claimed, ‘is the great moral literature of our time’—shortly before he set about proving it.” —James Sallis, The Boston Globe

“In France, which long ago embraced American crime fiction, thrillers are referred to as polars. And in France the godfather and wizard of polars is Jean-Patrick Manchette.... He’s a massive figure.... There is gristle here, there is bone.” —The Boston Globe

“Manchette is legend among all of the crime writers I know, and with good reason: his novels never fail to stun and thrill from page one.” —Duane Swierczynski, author of Expiration Date

“Manchette pushes the Situationist strategy of dérive and détournement to the point of comic absurdity, throwing a wrench into the workings of his main characters’ lives and gleefully recording the anarchy that results.” —Jennifer Howard, Boston Review

"Manchette...was instrumental in the development of a new generation of French crime fiction—the néo-polar—with his unpredictable, fast-paced, politically informed novels...[The Mad and the Bad] is violent, swiftly paced, and grotesquely funny." —The New Yorker

"A writer of urgency and cunning, of economy and laconic cool." —Chris Morgan, Los Angeles Review of Books

“Manchette is an impressively economical writer, lean and mean, with a single-mindedness of focus which permits just enough detail to make the stories palpable but precludes distractions.”
—Medium

"Building upon the hard-boiled genre and creating an offshoot of his own called the néo-polar, Manchette was a sincere but complicated trickster, a writer who claimed that detective fiction was 'the great moral literature of our time,' who wanted to use the genre to expose the pitfalls of capitalism and the victims of the exploited classes...and who produced thin novels that are very entertaining and stylistically singular.” —Tynan Kogane, Music and Literature

[Manchette’s] writing is lean and relentless, a brutal evocation of a world in which conventional morality is just another lie we tell ourselves...The Mad and the Bad is so dark it redefines noir: bleak and pointed, yes, but also infused with an understanding that what passes between us is not only compromised but more often faithless, less a matter of commitment or connection than a kind of unrelenting animal need.
—David L. Ulin, Los Angeles Times