The Cold Song: A Novel (Paperback) 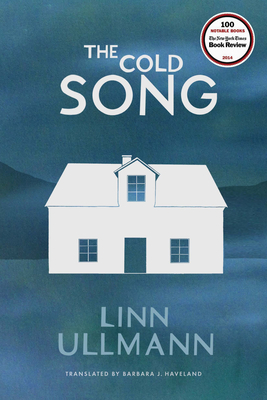 By Linn Ullmann
$15.95
Backordered. Place an order and we will let you know when to expect your book.

"Listen to these sentences:'She was just a girl in a red dress standing by the white-clothed trestle table with her mouth full of chicken.' 'What he wanted was to be able to destroy everything and still endure.'This story of a missing young woman, a failed writer and a family coming apart at the seams is riveting, absorbing, and full of sentences that will stop you in your tracks. Every time I pick up this book I read fifty pages without cease. Ullmann won me over within the first page. Read this book."

“Listen to these sentences: ‘She was just a girl in a red dress standing by the white-clothed trestle table with her mouth full of chicken.’ ‘What he wanted was to be able to destroy everything and still endure.’ This story of a missing young woman, a failed writer and a family coming apart at the seams is riveting, absorbing, and full of sentences that will stop you in your tracks. Every time I pick up this book I read fifty pages without cease. Ullmann won me over within the first page. Read this book.”

“Elegant and incisive, The Cold Song exposes a complex family drama that revolves around the day a beautiful young woman goes missing. When she is found murdered, her family members must sort out their suspicions of one another and question their own degrees of responsibility for her death. This novel is a startling meditation on loss, how we deal with it, how it echoes through generations, and how our mistakes cause us to lose the ones we love.”
— Jenny Patino Cervantes, City Lit, Chicago, IL

Ullmann’s characters are complex and paradoxical: neither fully guilty nor fully innocent

Siri Brodal, a chef and restaurant owner, is married to Jon Dreyer, a famous novelist plagued by writer’s block. Siri and Jon have two daughters, and together they spend their summers on the coast of Norway, in a mansion belonging to Jenny Brodal, Siri’s stylish and unforgiving mother.

Siri and Jon’s marriage is loving but difficult, and troubled by painful secrets. They have a strained relationship with their elder daughter, Alma, who struggles to find her place in the family constellation. When Milla is hired as a nanny to allow Siri to work her long hours at the restaurant and Jon to supposedly meet the deadline on his book, life in the idyllic summer community takes a dire turn. One rainy July night, Milla disappears without a trace. After her remains are discovered and a suspect is identified, everyone who had any connection with her feels implicated in her tragedy and haunted by what they could have done to prevent it.

The Cold Song is a story about telling stories and about how life is continually invented and reinvented.

Linn Ullmann is an award winning author, journalist, and literary critic. She has published four other novels in 33 languages, all of them critically acclaimed international bestsellers: Before You Sleep, Stella Descending, Grace, and A Blessed Child.  Ullmann is a cofounder and former artistic director of the international artist residency foundation of The Bergman Estate on Fårö. She lives in Oslo with her husband and children.

Barbara J. Haveland translates fiction, poetry, and drama by leading Danish and Norwegian writers such as Peter Høeg, Ib Michael, and Jan Kjærstad. Recent projects include new translations of Ibsen’s The Master Builder, Little Eyolf, and A Doll’s House. She lives in Denmark.

“Ullmann’s voice on the page is a lean, tough-minded thing, scrubbed and scoured of sentimentality straight through to the final, Carveresque pages, in which she pulls off an 11th- hour radiance, a tonal shift from minor to major key. The novel’s charm lies in these idiosyncratic glints, these glimmers of queer wit, uncensored scorn or sudden, unstinting sympathy.” —New York Times Book Review

"Ullmann is very good at evoking the peculiar, charged stasis of a household in which mentally active and intellectually vital people are resolutely failing to communicate with each other—the loneliness of communality, in short. She is a very exact writer, who is unsparing of her characters: a tonic, sharp, lyrical, intelligent novelist who deserves to be better-known in English." —The New Yorker Page-Turner Blog

“Ullmann’s rural Norway is an unfussy place, eloquent for its starkness, much like the spare language she paints it with. Her stage is less about physical place than mood and one’s place in the familial symmetry. While much happens in this novel, the events feel secondary. The prose is taut, yet the pace is languid as summer in that before-the-storm tension…The real achievement of this novel is Ullmann’s gift to imbue the tension of a thriller via the unease of the mundane…Yes, a murder occurs, but The Cold Song is more a mystery in the way most families tend to be mysteries unto themselves.” —Minneapolis Star Tribune

“Disturbingly tangled and riveting Norwegian fiction…Linn Ullmann’s The Cold Song reads like a cross between a psychological thriller and a grim fairy tale, the kind that takes place in a big house haunted by angry parents, lonely children and secrets ranging from the ordinary to the catastrophic.” —More

"[A] dark, lyrical novel with a firecracker of a beginning...Ullmann...is a forceful, exquisite talent." —Oprah.com

"The fifth novel by an award-winning Norwegian author and critic deserves to win her a much larger stateside readership." —Kirkus Reviews (starred review)

“The Cold Song doesn't so much unfold as it revolves, around the sudden disappearance of Milla, the young and beautiful summer nanny hired to take care of Siri and Jon's two children. The real ‘meat’ of the novel rests in its keen and unflinching exposure of the inner lives of its characters, revealed in brief spurts of narrative that shift back and forth in time. The result is riveting.” —Bookpage

"Ullmann deftly slips beneath the skin of her characters, depicting their wounds and worries in subtle gradations of tone and texture. The Cold Song remains a captivating, hybrid book." —SFGate.com

“In her latest heart-stopper, internationally bestselling author Ullmann, (who lives in Oslo), combines a mysterious murder with a razor-sharp eye for family relationships.” —Reader’s Digest

“In The Cold Song, Linn Ullmann explores the events surrounding a young woman’s murder in brief, haunting flashes that imbue the intimacies and betrayals of family life with the brooding magic of a Grimm’s fairy tale. This delicate, mesmerizing work attests to Ullmann's vast storytelling powers.” —Jennifer Egan, winner of the 2011 Pulitzer Prize for Fiction and the 2010 National Book Critics Circle Award

“The Cold Song is a wonderful book, like a family album made by a photographer who really cares for his subjects….The book has the light but also the weight of a Bergman film. It doesn't offer easy solutions but still has a kind of healing power."  —Peter Stamm, finalist for the Man Booker International Prize 2013 and author of We’re Flying and Seven Years

“The Cold Song recounts the unfolding of a large tragedy that has already happened—the mysterious disappearance of Milla, an adolescent girl—while also showing the smaller tragedy of a faltering marriage. Combining the tension of a whodunit with the subtlety of a domestic drama, Ullmann’s riveting novel is measured, impeccably observed, and utterly chilling.” —Rebecca Mead, author of My Life in Middlemarch

"The Cold Song is a fluid, shape-shifting novel, a family saga that turns into an erotically charged drama and then takes a darker turn into the terrain of a murder mystery. Linn Ullmann is an unusually talented and sympathetic writer, able to inhabit a wide range of characters and bring them all vividly to life.” —Tom Perrotta, author of Nine Inches: Stories and The Leftovers

“Contrary to popular belief, a death is not merely an end but the beginning of a story. The death in The Cold Song opens a Pandora’s box of human emotions, conflicts and deceptions. Readers of this novel will be reminded of the joys and complexities of living. Memories, laughter, gestures, trivialities—everything casts a shadow, and nothing leaves us safe. Linn Ullmann has mastered the art of seeing into the dark mysteries that make us who we are.” —Yiyun Li, award-winning author of The Vagrants and Kinder Than Solitude

“Linn Ullmann’s The Cold Song is a haunting novel about all the ways we endeavor to love and be loved, and the many mistakes we can make while trying. It's suspenseful and beautifully written and so absorbing that I could not put it down. When I finished reading it, I remained in a state of awe.” —Vendela Vida, author of The Lovers and Let the Northern Lights Erase Your Name

“[The Cold Song is] a psychological tour de force—not a beat wrong. The ending crept up on me, so quiet and unexpected. It’s a brilliant scene, with everybody locked in character—in the huit clos finality of character—and it hits you the minute you put the book down. I stayed up half last night finishing it, and now I’m sitting bleary-eyed at my desk, paying for the pleasure.” —Jane Kramer, author of Europeans and The Politics of Memory

“The Cold Song is a superb psychological mystery and a must for anyone who enjoys the genre. The writing is excellent. The switches between the time of the murder, the discovery of the body, and subsequent developments are many, but they fit together seamlessly. Highly recommended.” —John A. Broussard, I Love A Mystery