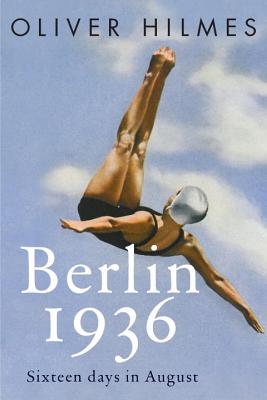 Named a Best Book of the Year by The Guardian, The Telegraph, Daily Mail, and Financial Times

A lively account of the 1936 Olympics told through the voices and stories of those who witnessed it, from an award-winning historian and biographer

Berlin 1936 takes the reader through the sixteen days of the Olympiad, describing the events in the German capital through the eyes of a select cast of characters--Nazi leaders and foreign diplomats, sportsmen and journalists, writers and socialites, nightclub owners and jazz musicians. While the events in the Olympic stadium, such as when an American tourist breaks through the security and manages to kiss Hitler, provide the focus and much of the drama, it also considers the lives of ordinary Berliners--the woman with a dark secret who steps in front of a train, the transsexual waiting for the Gestapo's knock on the door, and the Jewish boy fearing for his future and hoping that Germany loses on the playing field.

During the games the Nazi dictatorship was in many ways put on hold, and Berlin 1936 offers a last glimpse of the vibrant and diverse life in the German capital in the 1920s and 30s that the Nazis wanted to destroy.

Oliver Hilmes, born in 1971, studied history, politics, and psychology in Paris, Marburg, and Potsdam, and holds a doctorate in twentieth-century history. His best-selling work includes Malevolent Muse: The Life of Alma Mahler (2004) and Cosima Wagner: The Lady of Bayreuth (2007). Most recently he has published Franz Liszt: Musician, Celebrity, Superstar (2011) and Ludwig II: Der unzeitgem&aauml;ße König (2013).

Jefferson Chase is a writer and journalist based in Berlin. He has translated more than a dozen German texts into English, among them works by Thomas Mann, Wolfgang Schivelbusch, and Götz Aly.

“[Berlin 1936’s] publication earlier this year felt like a gift. Historian Oliver Hilmes has created an almost miniaturist narrative of the most controversial Olympics ever staged…Jefferson Chase’s excellent translation gives us taut prose that adds to the sense of unease.” —The Guardian, Best Books of the Year

“Memorable…Hilmes’s deceptively jaunty, even comic tone echoes that of the Games themselves.” —Financial Times, Best Books of the Year

“A masterpiece, and a highly original one too. Hitler’s notorious 1936 Olympics are only the starting point for a detailed evocation of an era…phenomenally immersive.” —The Telegraph, Best Sports Books of the Year

“A small masterpiece—you actually feel like you were there.” —Daily Mail, Best Sports Interest Books of the Year

“With the skill of a novelist, Hilmes weaves into his account the menacing presence of Hitler, deviously staging the Games to deceive a global audience unaware of the horrific evils he is about to unleash. A riveting drama.” —Booklist (starred review)

“[A] panorama of that fateful summer…Hilmes provides fascinating insights into the events…Verdict: A unique sports history recommended for all libraries.” —Library Journal

“[G]ives a ‘you-are-there’ sense of urgency and engagement which few books offer.” —“Beyond the Beyond,” WIRED.com

“Berlin 1936 is an entertaining account of the 16 days of the Berlin Olympics. It is not a straight history of the Games…Rather it is a vivid collage of vignettes gleaned from diaries and memoirs, police reports, snippets from newspapers, and so on. It dances from comedy to tragedy, from the ironic to the sinister, to give a picture of a darkening Germany…Hilmes has an eye for incidental detail.” —The Times (UK)

“Lively…Hilmes has a gift for storytelling. Each chapter covers a single day and offers vivid vignettes.”  —The Guardian (UK)

“[T]his multidimensional view of each day of the notorious 1936 Olympic Games is a brisk read and a fascinating view of prewar Germany…Famous figures such as Jesse Owens and Leni Riefenstahl make the narrative sparkle, but Hilmes’s portrayal of ordinary citizens illuminates this moment in history with an intensely palpable sense of foreboding.” —National Book Review

“Sensational, sensory, and smartly sophisticated, this is a fine example of history come fully and meaningfully alive.” —Jewish Book Council

“Fascinating…Hilmes has gathered testimony from diaries, newspapers, and other sources that show how those Olympic days were experienced by the ‘ordinary people’ of Berlin.” —Signature Reads

“Oliver Hilmes’s Berlin 1936 is a punchy, vibrant, and highly original account of the most controversial of all modern Olympiads. By viewing each day of the festival through a wide cast of characters, from diplomats and sportsmen through coroners and concentration-camp inmates, Hilmes pulls the reader into the drama of the moment without neglecting the wider context of Nazi oppression and brutality.” —David Clay Large, author of Nazi Games: The Olympics of 1936 and Munich 1972: Tragedy, Terror, and Triumph at the Olympic Games

“[A] witty, ironic diary of the final transitional days of Berlin, from bohemian superpower to Goebbels-inspired new social media center for the gangsters of the Nazi party…It captures a moment in time never seen before…A delight to read.” —Stephen Hopkins, director of Race

“A rewarding read for the specialist historian and general public alike. Hilmes has written a history that succeeds where other narratives of the ‘Nazi Games’ often fail. He manages to bring these sixteen days in the summer of 1936 back to life by unfolding a panorama in which the everyday and banal interacts with the special and extraordinary in often surprising and insightful ways.” —Professor Kay Schiller, author of The 1972 Munich Olympics and the Making of Modern Germany