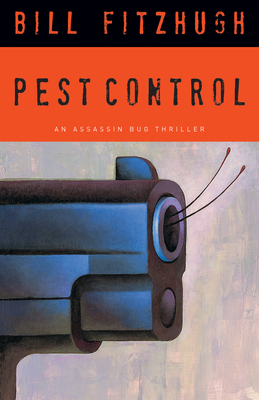 Bob Dillon can't get a break. A down-on-his-luck exterminator, all he wants is his own truck with a big fiberglass bug on top -- and success with his radical new, environmentally friendly pest-killing technique. So Bob decides to advertise.
Unfortunately, one of his flyers falls into the wrong hands. Marcel, a shady Frenchman, needs an assassin to handle a million-dollar hit, and he figures that Bob Dillon is his man. Through no fault -- or participation -- of his own, this unwitting pest controller from Queens has become a major player in the dangerous world of contract murder.
And now Bob's running for his life through the wormiest sections of the Big Apple -- one step ahead of a Bolivian executioner, a homicidal transvestite dwarf, meatheaded CIA agents, cabbies packing serious heat ... and the world's number-one hit man, who might just turn out to be the best friend Bob's got.

Bill Fitzhugh is the award-winning author of eight satiric crime novels. The New York Times called him "a strange and deadly amalgam of screenwriter and comic novelist. His facility and wit, and his taste for the perverse, put him in a league with Carl Hiaasen and Elmore Leonard." Fitzhugh's debut novel, Pest Control, was one of Amazon's Top 50 mysteries in 1997; it has been translated into half a dozen languages, produced as a stage musical, and a German radio show. Warner Brothers owns the film rights. Since 2005, Fitzhugh has also written, produced, and hosted "Fitzhugh's All Hand Mixed Vinyl" on Sirius-XM Satellite Radio's Deep Tracks channel. He is one of only three outside hosts on Deep Tracks. The other two are Tom Petty and Bob Dylan.

“...this is one roach motel you’ll gladly check into.” (Time Out New York )

“...a clever and satisfying debut...offbeat, engaging, and very funny reading, it is wholly successful.” (Washington Post )

“PEST CONTROL is an eccentrically comic take on the high-tech thriller...[it is a] strange and funny...curiously appealing little novel of intrigue” (National Public Radio - All Things Considered )

“A very funny and interesting book...give it to someone who needs a good laugh.” (San Antonio Express-News )