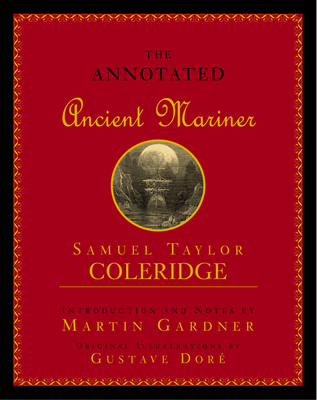 By Samuel Taylor Coleridge
$32.99
Not available to order.

Coleridge's greatest work, The Rime of the Ancient Mariner, is utterly unique, unlike any other ballad. No narrative poem has rivaled it in combining scenes of terror with scenes of incomparable beauty. Although enormously popular in the nineteenth century, it is seldom read or studied today. This annotated version by Martin Gardner will help to renew the appreciation and deepen the understanding of Coleridge's unjustly neglected masterpiece.

Preceding the poem is a biographical sketch of the great poet, which emphasizes those aspects of his many-sided life and personality that have the strongest bearing on the poem, especially on circumstances surrounding its composition. Both the 1798 and 1834 versions of the poem are presented, with notes on words, lines, and stanzas that Coleridge later excised. Following the poem, Gardner summarizes major critical attitudes toward the ballad, discusses possible higher levels of meaning, and closes with questions concerning the poem's much-debated moral.

Many artists have illustrated the Rime, but none as skillfully as Gustave Doré. He was far and away the most popular and prolific book illustrator of all time, and though his work has been out of fashion for some time, it is becoming harder and harder to dismiss him as a mere yeoman illustrator.

Here is your chance to read, or reread, Coleridge's classic Rime, to fully understand it, and to relish Doré's magnificent illustrations.

Martin Gardner, the creator of Scientific American’s “Mathematical Games” column, which he wrote for more than twenty-five years, was the author of almost one hundred books, including The Annotated Ancient Mariner, Martin Gardner’s Favorite Poetic Parodies, From the Wandering Jew to William F. Buckley Jr., and Science: Good, Bad and Bogus. For many years he was also a contributing editor to the Skeptical Inquirer.