Nausicaä of the Valley of the Wind, Vol. 1 (Paperback) 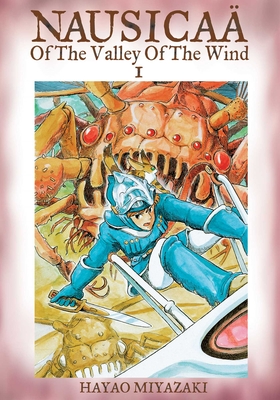 An epic fantasy tale written and illustrated by the legendary director Hayao Miyazaki!

In a long-ago war, humankind set off a devastating ecological disaster. Thriving indistrial societies disappeared. The earth is slowly submerging beneath the expanding Sea of Corruption, an enormous toxic forest that creates mutant insects and releases a miasma of poisonous spores into the air.At the periphery of the sea, tiny kingdoms are scattered on tiny parcels of land. Here lies the Valley of the Wind, a kingdom of barely 500 citizens; a nation given fragile protection from the decaying sea's poisons by the ocean breezes; and home to Nausicaä.

Nausicaä, a young princess, has an empathic bond with the giant Ohmu insects and animals of every creed. She fights to create tolerance, understanding and patience among empires that are fighting over the world's remaining precious natural resources.

Hayao Miyazaki is one of Japan’s most beloved animation directors. In 2005 he was awarded the Venice International Film Festival’s Golden Lion Award for Lifetime Achievement, and his Studio Ghibli received the festival’s Osella Award for overall achievement in 2004. Miyazaki’s films include Spirited Away, winner of the 2002 Academy Award® for Best Animated Feature Film, as well as Castle in the Sky, My Neighbor Totoro, Kiki's Delivery Service, Princess Mononoke, Howl's Moving Castle, and Ponyo, all of which have received great acclaim in the U.S. Miyazaki’s other achievements include the highly regarded manga series Nausicaä of the Valley of the Wind and Starting Point: 1979-1996, a collection of essays, interviews, and memoirs that chronicle his early career and the development of his theories of animation. Both are published in English by VIZ Media.