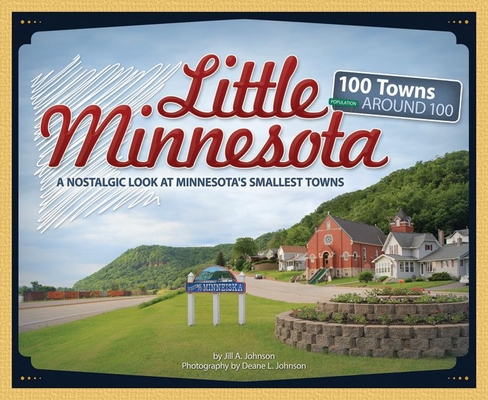 By Jill A. Johnson, Deane L. Johnson (Photographer)
Unavailable. Orders will be auto-cancelled.

They're Minnesota's Smallest Towns, But They Have Huge Character

Experience the rich stories, histories, and cultures of 100 charming small towns, with populations from 5 to 141. Author Jill A. Johnson introduces you to the friendly people who call these places home. Each entry in the book features folks who know what it means to help their neighbors and locales that range from quaint to historic. It's one book, and it's one hundred towns to love.

Jill A. Johnson grew up in Strandquist, population 73, and Karlstad, population 700, in remote northwestern Minnesota. In 2001, she opened Beagle Books, an independent bookstore in Park Rapids, Minnesota, and sold the business in 2007, excluding Kallie, the beagle. Jill has worked as a physical therapist since 1974, and is currently employed at the hospital in Park Rapids. She lives in the woods with her husband, Deane, and their notorious dog. Deane L. Johnson has been an active photographer since acquiring his first Canon FTb in 1976. He grew up in Grand Forks, North Dakota, and has spent most of the rest of his life living in and traveling around northern Minnesota. A retired family physician, he is a founding member of the Jackpine Writers' Bloc, plays clarinet and saxophone, and was a co-owner of Beagle Books of Park Rapids with his wife, Jill.