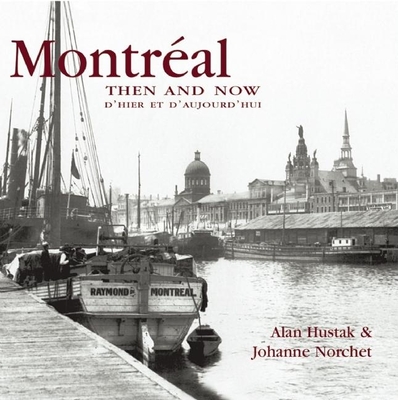 By Alan Hustak, Johanne Norchet
Unavailable. Orders will be auto-cancelled.

Considered North America's most "European" city, Montr al is known for its culture, sophisticated population, and its amazing architectural history. This addition to the hugely popular Then and Now series takes readers to Qu bec's charming capital city, Montr al, for an amazing past and present tour. A rich historical overview written by Alan Hustak (a journalist for the Montr al Gazette), it describes Montr al's development from a fur trading outpost on the banks of the St. Lawrence River to its present incarnation as the business and cultural center of Canada. Originally named Ville-Marie, the settlement became known as Mont Royal, after the tallest of the hills overlooking the river valley. Readers will marvel at how much this modern metropolis has evolved. Fascinating side-by-side then-and-now images of popular destinations like the Windsor Hotel, St. Ann's Market, Christ Church Cathedral, and Montr al Harbor showcase Montr al's finest architecture and views.

Born in Saskatchewan, Alan Hustak was educated by Jesuits in Regina and Washington D.C.and moved to Montreal in 1967 where he worked as a national television reporter for CTV and as a CBC radio reporter. The winner of a Canadian National Magazine award for feature writing, he has been with the Gazette in Montreal for 18 years. He is the author of several books, including Lougheed, the biography of the former Alberta premier, Titanic: A Canadian Story, and St. Patrick's of Montreal, the Biography of a Basilica, which was a finalist for the 1998 Quebec Writers Federation Mavis GallantPrize for Non-fiction and a biography of 19th century Montreal surgeon, mayor and banker, William Hales Hingston. His most recent book is The Murder of Mary Gallagher, The True Story of the Ghost of Griffintown. A translator for 30 years, Johanne Durocher Norchet was born in Montreal and studied translation at McGill University. After working closely with five publishers at The Gazette for more than 20 years, she decided to forge ahead on her own and become a freelancer. For six years she wrote a column in The Gazette on antiques and collectibles.