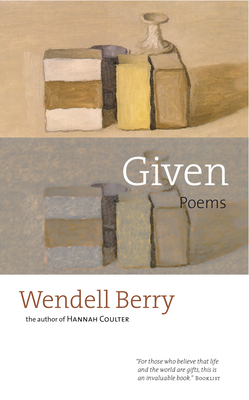 By Wendell Berry
$14.95
Backordered. Place an order and we will let you know when to expect your book.

For five decades Wendell Berry has been a poet of great clarity and purpose. He is an award-winning writer whose imagination is grounded by the pastures of his chosen place and the rooms and porches of his family's home. In Given, the work is as rich and varied as ever before. With his unmistakable voice as the constant, he dexterously maneuvers through a variety of forms and themes--political cautions, love poems, a play in verse, and a long series of Sabbath Poems that resulted from Berry's recent Sunday morning walks of meditation and observation. Berry's work is one of devotion to family and community, to the earth and her creatures, to the memories of the past, and the hope of the future. His writing stands alongside the work of William Carlos Williams and Robert Frost as a rigorous American testament.

Wendell Berry is the author of fifty books of poetry, fiction, and essays. He was recently awarded the Cleanth Brooks Medal for Lifetime Achievement by the Fellowship of Southern Writers and the Louis Bromfield Society Award. For over forty years he has lived and farmed with his wife, Tanya, in Kentucky.