Everyone Says That at the End of the World (Paperback) 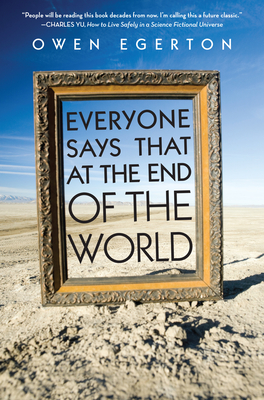 In this "often riotous, ultimately moving Cat's Cradle for our time," a Texas couple prepares for the apocalypse (Kirkus Reviews). In Austin, Milton and Rica are expecting their first child. It's four days and counting. Not for the baby. But for the end of the world. Evidence: Haydon Brock, a godless television star has suddenly traded his Hollywood fame for salvation. A prophetic hermit crab is embarking on an unfathomable cross-country quest. Planes are dropping from the sky. And the president and first lady disappear. No omen is too inexplicable to Milton. He's learned for a fact that our planet is one vast asylum for the incurably insane. And its cosmic guardians are about to close down the whole damn thing. Then Milton receives one more premonition: to seek out Haydon now holed up somewhere in Marfa. To what end Milton hasn't a clue. To find out, Milton, Rica, and their best friend head west across an increasingly cataclysmic landscape of inter-dimensional time travelers, Jesus clones, sleep-deprived monks, ghosts, and angels in an epic and manic quest to outrun the last days on Earth. Combining humor, philosophical inquiry and an unforgettable cast of characters, "this sharp-witted satire" (Booklist) "is a future classic, and people will be reading it] decades from now. I know I will" (Charles Yu, How to Live Safely in a Science Fictional Universe).

Owen Egerton is one of the talents behind the award-winning The Sinus Show and Master Pancake Theater at the Alamo Drafthouse Theater, and for several years was the artistic director of Austin's National Comedy Theatre. He's written screenplays for Fox, Warner Brothers and Disney studios. He is also the author of the one-man play The Other Side of Sleep and the novel The Book of Harold, which is currently in development as a television series with Warner Bros. Television. He lives in Austin.