Behave: The Biology of Humans at Our Best and Worst (Hardcover) 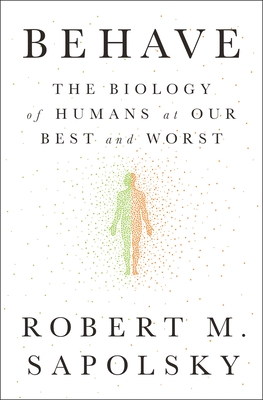 “It’s no exaggeration to say that Behave is one of the best nonfiction books I’ve ever read.” —David P. Barash, The Wall Street Journal

"It has my vote for science book of the year.” —Parul Sehgal, The New York Times

"Hands-down one of the best books I’ve read in years. I loved it." —Dina Temple-Raston, The Washington Post

From the celebrated neurobiologist and primatologist, a landmark, genre-defining examination of human behavior, both good and bad, and an answer to the question: Why do we do the things we do?

Sapolsky's storytelling concept is delightful but it also has a powerful intrinsic logic: he starts by looking at the factors that bear on a person's reaction in the precise moment a behavior occurs, and then hops back in time from there, in stages, ultimately ending up at the deep history of our species and its evolutionary legacy.

And so the first category of explanation is the neurobiological one. A behavior occurs--whether an example of humans at our best, worst, or somewhere in between. What went on in a person's brain a second before the behavior happened? Then Sapolsky pulls out to a slightly larger field of vision, a little earlier in time: What sight, sound, or smell caused the nervous system to produce that behavior? And then, what hormones acted hours to days earlier to change how responsive that individual is to the stimuli that triggered the nervous system? By now he has increased our field of vision so that we are thinking about neurobiology and the sensory world of our environment and endocrinology in trying to explain what happened.

Sapolsky keeps going: How was that behavior influenced by structural changes in the nervous system over the preceding months, by that person's adolescence, childhood, fetal life, and then back to his or her genetic makeup? Finally, he expands the view to encompass factors larger than one individual. How did culture shape that individual's group, what ecological factors millennia old formed that culture? And on and on, back to evolutionary factors millions of years old.

The result is one of the most dazzling tours d'horizon of the science of human behavior ever attempted, a majestic synthesis that harvests cutting-edge research across a range of disciplines to provide a subtle and nuanced perspective on why we ultimately do the things we do...for good and for ill. Sapolsky builds on this understanding to wrestle with some of our deepest and thorniest questions relating to tribalism and xenophobia, hierarchy and competition, morality and free will, and war and peace. Wise, humane, often very funny, Behave is a towering achievement, powerfully humanizing, and downright heroic in its own right.

Robert M. Sapolsky is the author of several works of nonfiction, including A Primate's Memoir, The Trouble with Testosterone, and Why Zebras Don't Get Ulcers. He is a professor of biology and neurology at Stanford University and the recipient of a MacArthur Foundation genius grant. He lives in San Francisco with his wife, two children and dogs.

"Sapolsky has created an immensely readable, often hilarious romp through the multiple worlds of psychology, primatology, sociology and neurobiology to explain why we behave the way we do. It is hands-down one of the best books I’ve read in years. I loved it." —Dina Temple-Raston, The Washington Post

“It’s no exaggeration to say that Behave is one of the best nonfiction books I’ve ever read.” —David P. Barash, The Wall Street Journal

“A quirky, opinionated and magisterial synthesis of psychology and neurobiology that integrates this complex subject more accessibly and completely than ever . . .  a wild and mind-opening ride into a better understanding of just where our behavior comes from. Darwin would have been thrilled.” —Richard Wrangham, The New York Times Book Review

“[Sapolskly’s] new book is his magnum opus, but is also strikingly different from his earlier work, veering sharply toward hard science as it looms myriad strands of his ruminations on human behavior. The familiar, enchanting Sapolsky tropes are here—his warm, witty voice, a sleight of hand that unfolds the mysteries of cognition—but Behave keeps the bar high . . . . A stunning achievement and an invaluable addition to the canon of scientific literature, certain to kindle debate for years to come.” —Minneapolis Star Tribune

“A masterly cross-disciplinary scientific study of human behavior: What in our glands, our genes, our childhoods explains our species’ capacity for both altruism and brutality? This comprehensive and friendly survey of a ‘big sprawling mess of a subject’ is leavened by an impressive data-to-silly joke ratio. It has my vote for science book of the year.” —Parul Sehgal, New York Times

“A monumental contribution to the scientific understanding of human behavior that belongs on every bookshelf and many a course syllabus . . . It is a magnificent culmination of integrative thinking, on par with similar authoritative works, such as Jared Diamond’s Guns, Germs, and Steel and Steven Pinker’s The Better Angels of Our Nature.” —Michael Shermer, American Scholar

“Behave is the best detective story ever written, and the most important. If you've ever wondered why someone did something—good or bad, vicious or generous—you need to read this book. If you think you already know why people behave as they do, you need to read this book. In other words, everybody needs to read it. It should be available on prescription (side effects: chronic laughter; highly addictive). They should put Behave in hotel rooms instead of the Bible: the world would be a much better, wiser place” —Kate Fox, author of Watching the English

“Magisterial . . . This extraordinary survey of the science of human behaviour takes the reader on an epic journey . . . Sapolsky makes the book consistently entertaining, with an infectious excitement at the puzzles he explains . . . a miraculous synthesis of scholarly domains.” —Steven Poole, The Guardian

Rarely does an almost 800-page book keep my attention from start to finish, but
“If anyone can save evolutionary biology from TED talkers and pop-science fabulists, it might be Sapolsky . . . . Behave ranges at great length from moral philosophy to social science, genetics to Sapolsky’s home turf of neurons and hormones—but all of it is aimed squarely at the question of why humans are so awful to each other, and whether the condition is terminal.” —Vulture

“Robert Sapolsky's students must love him. In Behave, the primatologist, neurologist and science communicator writes like a teacher: witty, erudite and passionate about clear communication. You feel like a lucky auditor in a fast-paced undergraduate course, where the implications of fascinating scientific findings are illuminated through topical stories and pop-culture allusions.” —Nature

“Sapolsky’s book shows in exquisite detail how culture, context and learning shape everything our genes, brains, hormones and neurons do.” —Times Literary Supplement

“Behave is like a great historical novel, with excellent prose and encyclopedic detail. It traces the most important story that can ever be told.” —Edward O. Wilson

“A wide-ranging, learned survey of all the making-us-tick things that, for better or worse, define us as human . . . . An exemplary work of popular science, challenging but accessible.” —Kirkus Reviews, starred

“[Sapolsky] does an excellent job of bringing together the expansive literature of thousands of fascinating studies with clarity and humor . . . . A tour-de-force.” —Library Journal (starred review)

“Sapolsky finds not the high moral drama of the soul choosing good or evil but rather down-to-earth biology . . . a remarkably encyclopedic survey of the sciences illuminating human conduct.”
—Booklist(starred review)

“Read Robert Sapolsky’s marvelous book Behave and you’ll never again be surprised by the range and depth of our own bad behavior. We all carry the potential for unconscious biases, to be damaged by our childhoods and map that damage onto our own loved ones, and to form the tribal ‘Us’ groups that treat outsiders as lesser ‘Thems.’ But to read this book is also, marvelously, to be given the hope that we have much more control of those behaviors than we think. And Behave gives us more than hope—it gives us the knowledge of how to act on that aspiration, to manifest more of our best selves and less of our worst, individually and as a society. That’s very good news indeed.”  —Charles Duhigg, author of The Power of Habit and Smarter Faster Better

"As wide as it is deep, this book is colorful, electrifying, and moving. Sapolsky leverages his deep expertise to ask the most fundamental questions about being human—from acts of hate to acts of love, from our compulsion to dehumanize to our capacity to rehumanize." —David Eagleman, PhD, neuroscientist at Stanford, author, presenter of PBS's The Brain

"Behave is a beautifully crafted work about the biology of morality. Sapolsky makes multiple passes at the target, using different time scales and systems. He shows you how all the perspectives and systems connect, and he makes you laugh and marvel along the way. Sapolsky is not just a leading primatologist; he’s a great writer and a superb guide to human nature." —Jonathan Haidt, New York University, author of The Righteous Mind

“This is a miraculous book, by far the best treatment of violence, aggression, and competition ever.  It ranges from how neurons and hormones interact, how emotions are an essential part of decision making, why adolescents are more likely to be violent than adults, why genes influence cultures and vice-versa, and the ins and outs of “we versus them,” all the way to “live and let live” truces in World War I and the My Lai massacre. Its depth and breadth of scholarship are amazing, building on Sapolsky’s own research and his vast knowledge of the neurobiology, genetic, and behavioral literature. For instance, Behave includes fair evaluations of complex debates (like over sociobiology) that I was involved in, and tackles controversial questions such as whether our hunter-gatherer ancestors warred on each other. He even takes on “free will” with a clarity usually absent from the writings of philosophers on the subject. All this is done brilliantly with a light and funny touch that shows why Sapolsky is recognized as one of the greatest teachers in science today.” —Paul R. Ehrlich, author of Human Natures