The Miniature Wife: and Other Stories (Paperback) 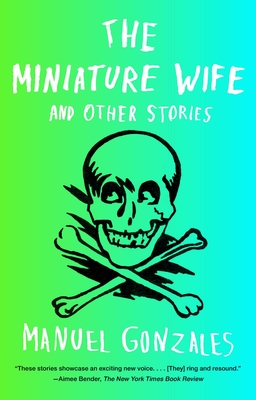 In the tradition of George Saunders and Aimee Bender, an exuberantly imagined debut that chronicles an ordinary world marked by unusual phenomena.

The eighteen stories of Manuel Gonzales’s exhilarating first book render the fantastic commonplace and the ordinary extraordinary, in prose that thrums with energy and shimmers with beauty. In “The Artist’s Voice” we meet one of the world’s foremost composers, a man who speaks through his ears. A hijacked plane circles a city for twenty years in “Pilot, Copilot, Writer.” Sound can kill in “The Sounds of Early Morning.” And, in the title story, a man is at war with the wife he accidentally shrank. For these characters, the phenomenal isn’t necessarily special—but it’s often dangerous.

In slightly fantastical settings, Gonzales illustrates very real guilt over small and large marital missteps, the intense desire for the reinvention of self, and the powerful urges we feel to defend and provide for the people we love. With wit and insight, these stories subvert our expectations and challenge us to look at our surroundings with fresh eyes. Brilliantly conceived, strikingly original, and told with the narrative instinct of a born storyteller, The Miniature Wife is an unforgettable debut.

Manuel Gonzales is a graduate of the Columbia University graduate creative writing program. He has published fiction and nonfiction in Open City, Fence, One Story, Esquire, McSweeney’s Quarterly Concern, and The Believer. He lives in Austin, Texas, with his wife and two children.

"These stories are wrought with forceful clarity, Borgesian inventiveness and enchanting, devious wit—an unforgettable debut from a uniquely gifted writer."
– Wells Tower, author of Everything Ravaged, Everything Burned

“This book has everything you could ask for in a collection, and even things you hadn’t thought to ask for, but secretly wanted: unicorns, mobsters, swamp monsters and werewolves. Manuel Gonzales weaves the supernatural into the lives of everyday citizens, from anthropologists to airline passengers, and the result is pure magic mixed with humor and deep humanity.”
–Hannah Tinti, author of The Good Thief

"You know that feeling you get when you pick up a book and realize you are hearing a voice you have never heard before but will be hearing for a long time? I had that feeling on page 5. Please pick up this book - you will have that feeling. Dark, smart and strange in a way that initially had me grasping for comparison but that ultimately revealed itself to be something new."
—Charles Yu, author of How to Live Safely in a Science Fictional Universe

“Manuel Gonzales’s The Miniature Wife is a marvel—a beautiful, hilarious and moving reinvention of the gothic, a testimony to the sublime powers of the imagination and language. This a book of extraordinary joy, compassion, horror and grace all rolled into one.”
—Dinaw Mengestu, author of How to Read the Air and The Beautiful Things that Heaven Bears

“It’s easy to compare Manuel Gonzales to George Saunders, but it would be just as easy to compare him to Borges or Márquez or Aimee Bender…He makes the extraordinary ordinary, and his playfulness is infectious.”
—Benjamin Percy, Esquire

“Excellent…Gonzales has built a peerless fictional universe by populating his stories with zombies, unicorns, werewolves and space warriors, and then giving them the sensibilities of worried middle managers…hilarious and chilling…a superior collection of writing and a signpost of an emerging talent with a strong and distinctive voice.”
—Michael Lindgren, The Washington Post

"Lucid and confident...because his prose is never sloppy and his rhythm is impeccable, Gonzales's sentences unfold with an unusual smoothness...these stories showcase an exciting new voice... [they] ring and resound."
—Aimee Bender, The New York Times Book Review

“Is there a term for something that's sad, funny, and strange all at once? Sunge? Frad? Because that would describe this imaginative debut…even the most absurd emotional conflicts feel familiar somehow, which only makes them more moving.”
—Melissa Maerz, Entertainment Weekly

“Gonzales’ voice is so new and different and dazzling that you won’t be able to put down his book.”
—Steph Opitz, Marie Claire

“The stories are written so believably, they handle the strange and surreal so carefully, that you want to believe the impossible is possible.”
—Roxane Gay, Tin House

“Wildly imaginative, at times surreal, and always captivating… Gonzales creates these bizarre scenarios that are so utterly believable you forget how impossible they actually are. There is an intelligent economy to his prose throughout the collection and I was thrilled by the originality of his ideas and how they were rendered.”
—Roxanne Gay, The Rumpus

“A triumph of the form…exhilarating… Gonzales' command of genre and his defiance of convention ripple throughout.”
—Shawn Badgley, Austin Chronicle

“Manuel Gonzales is his own weird, imaginative, witty self. Any story by him is going to take the reader on a ride through a new world that is eerily like our own, yet full of the unexpected.”
—Jenny Shank, Dallas Morning News

“A volume of artfully structured tales… a wild adventure through the human condition.”
—G. Clay Whittaker, The Daily Beast

“[The Miniature Wife] will stick with you. The places and characters will ring daily in your mind.”
—Cate McGehee, The Stranger

“Deeply imaginative… . With commendable skill, Gonzales seamlessly blends the real and the fantastic, resulting in a fun and provocative collection that readers will want to devour.”
—Publishers Weekly (starred review)

“Rife with ingenuity and beholden to few rules…Delightfully eerie tales from the dark side.”
—Kirkus Reviews

“With clear, matter-of-fact writing and relatable characters who are forced to make heartbreaking decisions… you get crazy scenarios mixed in fine writing and profound thoughts about the human condition and the state of the world. Manuel Gonzales can make you believe anything.”
—The Hispanic Reader blog