The Spiritual Journey of Alejandro Jodorowsky: The Creator of El Topo (Paperback) 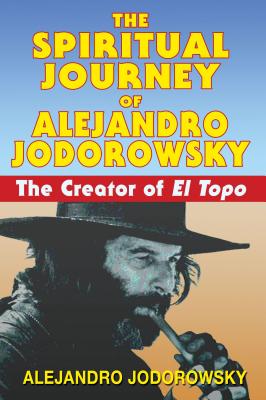 I love psychedelic cinema as much as I love psychedelic music. Kenneth Anger? Yes, please, The Monkee’s Head? Heck yeah. Sergei Parajanov? Absolutely. Holy Motors? Where do I sign up? But the most enlightened bodhisattva of psych cinema, its crown prince, the merry Fool in its Tarot, is undoubtedly Alejandro Jodorowsky. You may have recently become familiar with his failed attempt to bring Frank Herbert’s Dune to the screen through the documentary Jodorowsky’s Dune. Before Dune, Jodorowsky made a somewhat infamous reputation for himself with the films El Topo and The Holy Mountain. Film-making is not simply an artistic pursuit for Jodorowsky, his films and method of film-making are quite literally magickal rituals. This book chronicles the spiritual adventures that led Jodorowsky to create some of the most fiercely creative, unique and influential films in cinematic history.

In 1970, John Lennon introduced to the world Alejandro Jodorowsky and the movie, El Topo, that he wrote, starred in, and directed. The movie and its author instantly became a counterculture icon. The New York Times said the film “demands to be seen,” and Newsweek called it “An Extraordinary Movie!” But that was only the beginning of the story and the controversy of El Topo, and the journey of its brilliant creator. His spiritual quest began with the Japanese master Ejo Takata, the man who introduced him to the practice of meditation, Zen Buddhism, and the wisdom of the koans. Yet in this autobiographical account of his spiritual journey, Jodorowsky reveals that it was a small group of wisewomen, far removed from the world of Buddhism, who initiated him and taught him how to put the wisdom he had learned from his master into practice.

At the direction of Takata, Jodorowsky became a student of the surrealist painter Leonora Carrington, thus beginning a journey in which vital spiritual lessons were transmitted to him by various women who were masters of their particular crafts. These women included Doña Magdalena, who taught him “initiatic” or spiritual massage; the powerful Mexican actress known as La Tigresa (the “tigress”); and Reyna D’Assia, daughter of the famed spiritual teacher G. I. Gurdjieff. Other important wisewomen on Jodorowsky’s spiritual path include María Sabina, the priestess of the sacred mushrooms; the healer Pachita; and the Chilean singer Violeta Parra. The teachings of these women enabled him to discard the emotional armor that was hindering his advancement on the path of spiritual awareness and enlightenment.

Alejandro Jodorowsky is a playwright, filmmaker, composer, mime, psychotherapist, and author of many books on spirituality and tarot, and over thirty comic books and graphic novels. He has directed several films, including The Rainbow Thief and the cult classics El Topo and The Holy Mountain. He lives in France. In 2019, Alejandro Jodorowsky was cited as one of the "100 Most Spiritually Influential Living People in the World" according to Watkins Mind Body Spirit magazine.

"Rather than clarifying the meaning of his imagery, this book only inspires readers to enjoy its 'mystery'. . . . a worthy read, filled with growing pains and crises that end in artistic triumph and achievement of wisdom and compassion."
— Griselda Steiner, Scene4 Magazine, Jan 2009

"Jodorowsky's interactions with the motley crew of magas are fascinating and his words are always entertaining . . . "
— filmcomment, Film Society of Lincoln Center, NYC, Sep/Oct 2008

"How this man has lived into the koan of his life is intriguing and vividly related."
— Branches of Light, Issue 33, Fall-Winter-Spring 2008-09

" . . . for anyone who enjoys reading memoirs about truly interesting and influential people, this is definitely a book to check out."
— Curled Up with a Good Book, Nov 2008