To Be Honest: Voices on Donald Trump's Muslim Ban (Paperback) 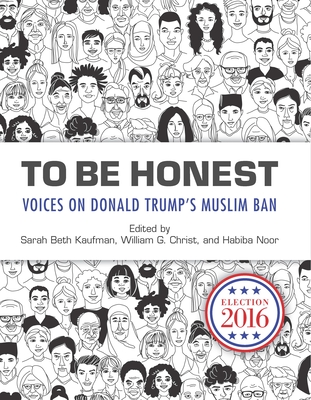 To Be Honest is a play script and series of essays reflecting on the ways Muslims are perceived and spoken of in America. With funding from a Mellon Foundation grant, several professors conducted more than two hundred hours of qualitative interviews in Texas with people across religious and political spectrums. Their conversations confirm expected polarizations and reveal new, troubling perspectives. To Be Honest is a "documentary theater" script born from these interviews, which were used to help create monologues that give a face to the nuanced complexity of what is rarely said aloud. The monologues touch on non-Muslim millennials' understandings of Islam, racism's intersection with Islamophobia, the fatigue of "activist" Muslims, the impact of intervention in the Middle East on U.S. military veterans, feminist readings of the hijab, the Trump presidency, and more. Six essays contextualize the script's underlying themes and provide material for further study. In these polarizing times, To Be Honest illuminates the striking reality that Americans have vastly different experiences with Islam, from evangelicals who work to convert Muslims with the aim of "helping them achieve peace" to Muslim youth who struggle to make sense of why society dissects their religion. Students, scholars, readers, and theatergoers will come away with insights that allow them to move beyond limited views of Islam by listening to and engaging with others. To Be Honest is an important script for staging and a valuable tool for dialogue across ideological perspectives.

Habiba Noor is a visiting assistant professor of education at Trinity University whose work focuses on the Muslim communities in Texas, New York City, and London, as well as on activism and research on Islam and Islamophobia at the local and legislative levels in Texas.