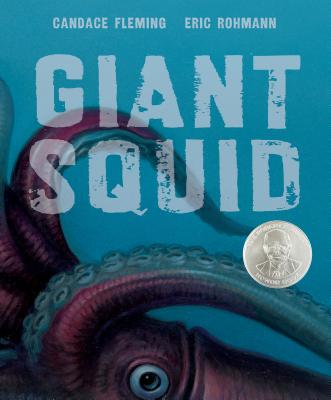 "Rarely seen and not fully understood, giant squid loom large in our collective imagination. And this poetic, visually stunning ode to their mysterious (and fearsome) charms fascinates and intrigues in equal measure."

The giant squid is one of the most elusive creatures in the world. As large as whales, they hide beyond reach deep within the sea, forcing scientists to piece together their story from those clues they leave behind.

An injured whale's ring-shaped scars indicate an encounter with a giant squid. A piece of beak broken off in the whale's belly; a flash of ink dispersed as a blinding defense to allow the squid to escape-- these fragments of proof were all we had . . . until a giant squid was finally filmed in its natural habitat only two years ago.

In this beautiful and clever nonfiction picture book about the giant squid, Candace Fleming and Eric Rohmann explore, both visually and poetically, this hidden creature's mysterious life.

Eric Rohmann won the Caldecott Medal for My Friend Rabbit, and a Caldecott Honor for Time Flies. He is also the author and illustrator of Clara and Asha, A Kitten Tale, and The Cinder-Eyed Cats, among other books for children. He has illustrated many other books, including Last Song, based on a poem by James Guthrie, and has created book jackets for a number of novels, including His Dark Materials, by Philip Pullman.  Rohmann was born in Riverside, Illinois in 1957. He grew up in Downers Grove, a suburb of Chicago. As a boy, he played Little League baseball, read comic books, and collected rocks and minerals, insects, leaves, and animal skulls.  Rohmann has his BS in Art and an MS in Studio Art from Illinois State University, and an MFA in Printmaking/Fine Bookmaking from Arizona State University. He also studied Anthropology and Biology. He taught printmaking, painting, and fine bookmaking at Belvoir Terrace in Massachusetts and introductory drawing, fine bookmaking, and printmaking at St. Olaf College in Minnesota.  He lives in a suburb of Chicago.

Candace Fleming is the author of Giant Squid, an ALA Notable Book and Charlotte Zolotow Honor Book, and numerous other books for children. She lives in Oak Park, Illinois.

I have always been a storyteller. Even before I could write my name, I could tell a good tale. And I told them all the time. As a preschooler, I told my neighbors all about my three-legged cat named Spot. In kindergarten, I told my classmates about the ghost that lived in my attic. And in first grade, I told my teacher, Miss Harbart, all about my family’s trip to Paris, France.

I told such a good story that people always thought I was telling the truth. But I wasn’t. I didn’t have a three-legged cat or a ghost in my attic, and I’d certainly never been to Paris, France. I simply enjoyed telling a good story . . . and seeing my listener’s reaction.

Sure, some people might have said I was a seven-year-old fibber. But not my parents. Instead of calling my stories "fibs" they called them "imaginative." They encouraged me to put my stories down on paper. I did. And amazingly, once I began writing, I couldn’t stop. I filled notebook after notebook with stories, poems, plays. I still have many of those notebooks. They’re precious to me because they are a record of my writing life from elementary school on.

In second grade, I discovered a passion for language. I can still remember the day my teacher, Ms. Johnson, held up a horn-shaped basket filled with papier-mâché pumpkins and asked the class to repeat the word "cornucopia." I said it again and again. I tasted the word on my lips. I tested it on my ears. That afternoon, I skipped all the way home from school chanting "Cornucopia! Cornucopia!" From then on, I really began listening to words -- to the sounds they made, and the way they were used, and how they made me feel. I longed to put them together in ways that were beautiful and yet told a story.

As I grew, I continued to write stories. But I never really thought of becoming an author. Instead, I went to college, where I discovered yet another passion -- history. I didn’t realize it then, but studying history was really just an extension of my love of stories. After all, some of the best stories are true ones -- tales of heroism and villainy made more incredible by the fact they really happened.

After graduation, I got married and had children. I read to them a lot, and that’s when I discovered the joy and music of children’s books. I simply couldn’t get enough of them. With my two sons in tow, I made endless trips to the library. I read stacks of books. I found myself begging, "Just one more, pleeeease!" while my boys begged for lights-out and sleep. Then it struck me. Why not write children’s books? It seemed the perfect way to combine all the things I loved -- stories, musical language, history, and reading. I couldn’t wait to get started.

But writing children’s books is harder than it sounds. For three years, I wrote story after story. I sent them to publisher after publisher. And I received rejection letter after rejection letter. Still, I didn’t give up. I kept trying until finally one of my stories was pulled from the slush pile and turned into a book. My career as a children’s author had begun.

"The artwork is marvelous; the murky blues and blacksof the ocean make it easy to appreciate how hard it has been for scientists and sailors to see the elusive squid—and how startling it must be when that enormous “ghostly, lidless” eye appears."— The Horn Book, starred review

"Curious readers will be inspired by the engaging text and stunning illustrations to learn more about the giant squid. An essential purchase for science collections."—School Library Journal, starred review

"The assembling of this creature from its parts to the whole, through both pictures and poetry, will captivate audiences young and old."—Publishers Weekly, starred review