And Then It's Spring (Hardcover) 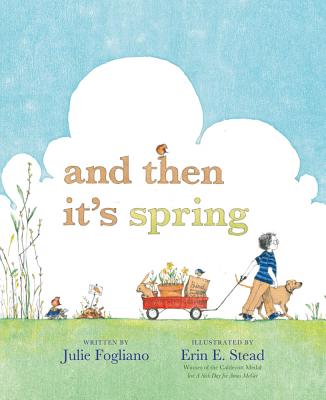 "What better way to usher in the season than with this tender
story about one boy's long determined wait for that first glorious
green shoot to sprout. Illustrated by Caldecott Winner Erin Stead, this
simple yet expressive look at the passing of the seasons will be
welcomed by many, young and old."

Following a snow-filled winter, a young boy and his dog decide that they've had enough of all that brown and resolve to plant a garden. They dig, they plant, they play, they wait . . . and wait . . . until at last, the brown becomes a more hopeful shade of brown, a sign that spring may finally be on its way.

Julie Fogliano's tender story of anticipation is brought to life by the distinctive illustrations Erin E. Stead, recipient of the 2011 Caldecott Medal.

And Then It's Spring is one of The Washington Post's Best Kids Books of 2012.
One of Kirkus Reviews' Best Children's Books of 2012

Julie Fogliano is the New York Times bestselling author of And Then It’s Spring and If You Want to See a Whale as well as the poetry collection, When Green Becomes Tomatoes. Recipient of the 2013 the Ezra Jack Keats award, her books have been translated into more than ten languages. Julie lives in the Hudson Valley with her husband and three children. When she is not folding laundry or wondering what to make for dinner, she is staring out the window waiting for a book idea to fly by.

Erin E. Stead has illustrated several children's books with her husband, Philip C. Stead. Their first picture book, A Sick Day for Amos McGee, won the Caldecott Medal. She has also illustrated And Then It's Spring (written by Julie Fogliano) and contributed to Eric Carle's What's Your Favorite Animal? The Steads divide their time between Ann Arbor, Michigan, and New York City.

“Green is what the bespectacled boy in Julie Fogliano's 'And Then It's Spring' eagerly hopes to see as he waits for seeds he has planted to sprout from the brown earth. Did birds eat the seeds? Did bears trample them? In Erin E. Stead's finely drawn illustrations, we see the imagined bears lounging in the seedbeds with a sign that reads: 'Please do not stomp here--there are seeds and they are trying.'” —The Wall Street Journal

“This seemingly real-time experience of getting to green is a droll, wistful ode to the stamina behind wanting, will, and perseverance.” —School Library Journal, Starred

“In an understated and intimate partnership, Fogliano and Stead conjure late winter doldrums and the relief of spring's arrival, well worth the wait.” —Publishers Weekly, Starred

“Fogliano's poetic yet grounded narrative is reminiscent of Charlotte Zolotow's picture-book texts in its understatement and straightforward, childlike observations…As for the illustrations, there's no sophomore slump for Stead: her second book is even better than her 2011 Caldecott winner, A Sick Day for Amos McGee (rev. 5/10).” —Horn Book Magazine, Starred

“A first-time author and the Caldecott Award-winning illustrator of A Sick Day for Amos McGee (2011) team up in this beautiful ode to a patient gardener.” —Booklist, Starred

“…a humble yet miraculous world…” —BCCB