Secrets of the Moneylab: How Behavioral Economics Can Improve Your Business (Compact Disc) 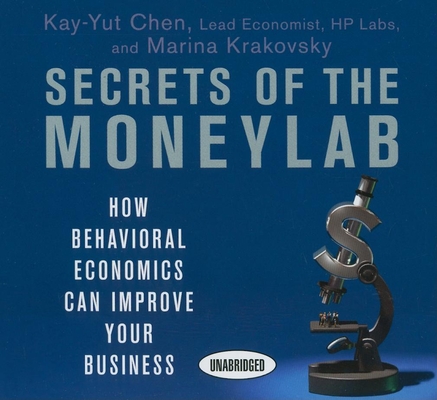 By Kay-Yut Chen, Marina Krakovsky, Don Hagen (Narrated by)
$29.98
Out of Stock; Usually Arrives in 5-7 Days
(This book cannot be returned.)

Popular books on behavioral economics such as Predictably Irrational and Nudge have shown us that people aren't rational. But irrational doesn't mean irregular in fact, modern science has shown time and again that our behavior, strange as it sometimes seems, follows predictable patterns. Just as the physical world is governed by gravity, electromagnetism, and other invisible forces, so human behavior is guided by a set of forces that we can't see but whose evidence is all around us. Now a pioneering Hewlett-Packard economist describes fascinating experiments into human behavior and offers practical lessons being put to use right now at HP and other leading companies. Using examples as timely as the auto industry bailout, it tackles key issues such as:

Kay-Yut Chen leads Hewlett Packard's experimental economics lab-the first such lab at any company-which he established in 1994 immediately after earning his Ph.D. from Caltech. His research has been used in HP's Consumer Business Organization, Procurement, and several organizations in the printer division. His laboratory designed part of the standard contract between Hewlett-Packard and U.S. retailers like Wal-mart and Best Buy. His work has been featured in Scientific American, Risk Magazine, Newsweek, Financial Times, The Wall Street Journal, BusinessWeek.com, and Portfolio.com. Marina Krakovsky is a journalist who frequently writes on topics at the intersection of science and business. Her credits include Scientific American, Slate, Discover, Psychology Today, O, The Oprah Magazine, The Washington Post, and The New York Times Magazine.