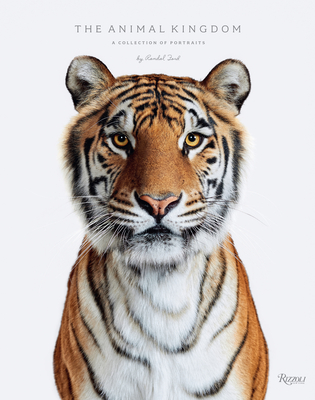 These arresting studio portraits capture the beauty, power, and even humor of 150 furry and feathered species - a delight for any animal or bird lover.

Acclaimed photographer Randal Ford celebrates our fascination with and love of animals through his engaging portraits of the animal kingdom. A young male lion cub seems to sport a rebellious mohawk; a chimpanzee adopts a pensive pose; a curious duckling cocks his head at the camera lens and flaps his wings. The featured animals cover a wide range, from birds such as the African crane, cockatoos, flamingos, and roosters, to big cats such as tigers, cheetahs, and leopards, to Arabian horses, bulls, and Longhorn sheep, among many others. Bird and animal lovers will be drawn to the powerful and emotionally engaging images that seem to reveal the individual character of the other animals that share the Earth with us. Elegantly designed and packaged, this book will be the perfect gift and addition to the home of any lover of animals or fine photography.

Randal Ford's works have appeared on the cover of Time, Texas Monthly, and Communication Arts, the advertising industry's most prestigious publication. Among other accolades, his animal photographs were awarded first place and best of show in the fine art category in the prestigious International Photo Awards competition in 2017.
Dan Winters is widely recognized for his unusual celebrity portraiture. Winters has won more than 100 national and international awards from American Photography, Communication Arts, the Society of Publication Designers, and Life. His work is in the permanent collections at the National Portrait Gallery.
Project Survival's Cat Haven is an innovative park dedicated to the preservation of wild cats. While some of the cats at Project Survival have been orphaned in the wild or have needed to be re-homed due to varying circumstances, they do not call themselves a sanctuary.

"Each of Ford’s arresting photos delivers an unexpected sense of connection. Randall Ford’s Dr. Doolittle talent is the ability to capture both what is on the inside and out. Each photo features a close up of a single animal that is accentuated by a stark, unadorned backdrop. The animals appear natural, confident, and almost humanlike in their poses as their pensive faces stare out beyond the page. Who knows if animals truly experience complex emotion and thoughts? Ford’s imagery certainly leads one to believe that they do. If you love animals and are inspired by fine art, this book is a gem."
—New York Journal of Books

"Just like high school, nature is full of class clowns, punks, drama geeks and stoics—and acclaimed photographer Randal Ford, whose work has appeared on the cover of Time and Communication Arts, captures these distinct personalities in Animal Kingdom: A Collection of Portraits. These stunning animal portraits will touch your heart."
—Parade Magazine


USA Today: 10 gorgeous coffee-table books perfect for the book lover on your holiday gift list!
What it’s about: Another book of animal photographs? This one stands out from the herd. Randal Ford literally shoots “portraits” of lions and tigers and bears (and pigs and hens and sloths and horses and cows and chimps) in a studio setting against a white backdrop. (Many were brought to the studio from zoos.)
What’s to love: These arresting, often startling images are somehow both intimate and remote, as if Ford were a 21st century John James Audubon, wielding a camera instead of a paintbrush. (Don't miss the fascinating stories Ford tells in the back about each photo session.)
— USA Today

"Named one of ‘The 30 Essential Coffee-Table Books of 2018’: There’s something amazingly incongruous about seeing wild animals in a portrait studio setting—hats off to acclaimed shutterbug Randal Ford for using this incongruity to imbue a zoo’s worth of fauna with a degree of (often hilarious) humanity not previously seen.” — InsideHook.com

"There’s something amazingly incongruous about seeing wild animals in a portrait studio setting — hats off to acclaimed shutterbug Randal Ford for using this incongruity to imbue a zoo’s worth of fauna with a degree of (often hilarious) humanity not previously seen." —Inside Hook

"Calling all animal lovers looking for a ferociously cool photo book for their coffee table—look no further than The Animal Kingdom: A Collection of Portraits from wildlife photographer Randal Ford. These stunning shots of magnificent beasts are truly wild."
— Maxim

"Each image elicits an emotion so powerful it becomes impossible to walk away from the book without wanting to better the world for these animals. The intimate portrayals, which range from a lion cub with a punk-style Mohawk, to a Highland cow whose eyes are hilariously covered by a shaggy ‘do, to a Jacob sheep giving the impression he just got caught doing something he shouldn’t be doing—are a gift to the animal kingdom. They instill in the reader a determination to do better by them—as we should.”
— DOWNTOWN Magazine NYC