The World Almanac and Book of Facts 2018 (Paperback) 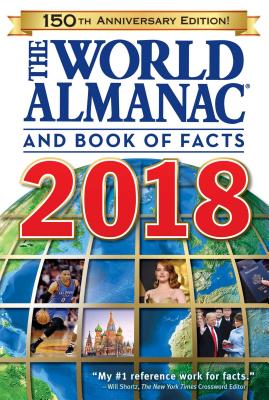 By Sarah Janssen (Editor)
Unavailable. Orders will be auto-cancelled.

The 150th Anniversary edition of the best-selling reference book of all time The World Almanac(R) and Book of Facts is America's top-selling reference book of all time, with more than 82 million copies sold. Since 1868, this compendium of information has been the authoritative source for all your entertainment, reference, and learning needs. The 150th anniversary edition celebrates its illustrious history while keeping an eye on the future. Praised as a "treasure trove of political, economic, scientific and educational statistics and information" by The Wall Street Journal, The World Almanac and Book of Facts will answer all of your trivia needs--from history and sports to geography, pop culture, and much more. Features include:

Sarah Janssen is the senior editor of The World Almanac(R) and Book of Facts. She lives in Brooklyn, NY.